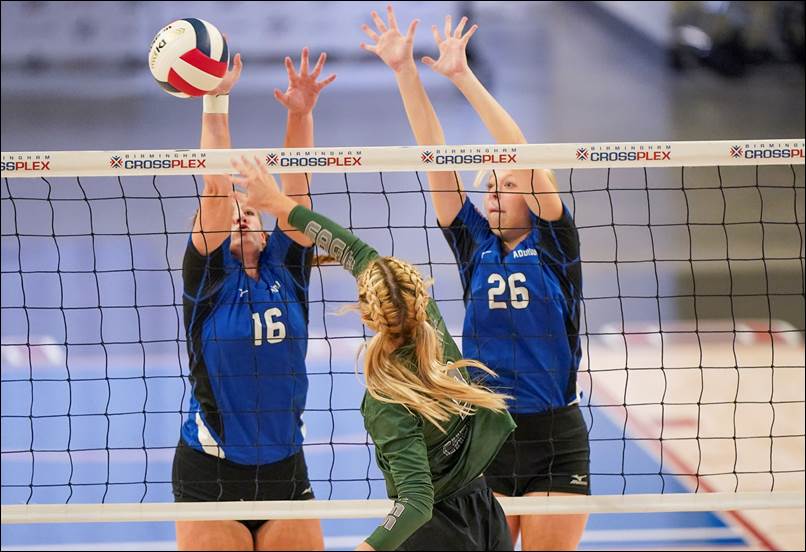 Addison 3, Covenant Christian 0
BIRMINGHAM – Addison High School’s volleyball mystique lives on. The Bulldogs (46-10) defeated Covenant Christian in straight sets 24-9, 25-19, 25-18 to claim Addison’s 14th state volleyball overall at the Birmingham CrossPlex Bill Harris Arena as the AHSAA 2022 State Volleyball Championships continued Wednesday.
Addison senior setter Gracie Manley had 29 assists, five kills, seven digs and one service ace to lead the Bulldogs to their straight crown. For Manley, it was the fourth in her career. The Bulldogs won the 2020 and 2021 state titles with Manley in the lineup. Addison, coached by Kaydi Woodard, moved from 2A to 1A this season.
Junior outside hitter Dacey Baker had 13 kills, for Addison. Katie Barrett had nine kills and Abby Waldrep had eight. Libero Bailee Ory led the team with 12 digs.
For Covenant Christian (36-17), coached by Alyson Estave, senior Ashlee Gann had 10 kills and 11 digs, and freshman Zoe Griffin had seven kills and six digs. Setter Sierra Cook had 20 assists.
The AHSAA State Volleyball Championships continue today with the Class 2A, and 4A title matches at Bill Harris Arena. Classes 3A, 6A and 7A opened play today at the CrossPlex arena with quarterfinal and semifinal matches. The 52nd annual state tournament closes out Thursday with state finals in those three classes at Bill Harris Arena.
All matches in both sites are being live streamed over the NFHS Network’s subscriber-Based platform with veteran broadcaster Jerry Young handling the play-by-play.