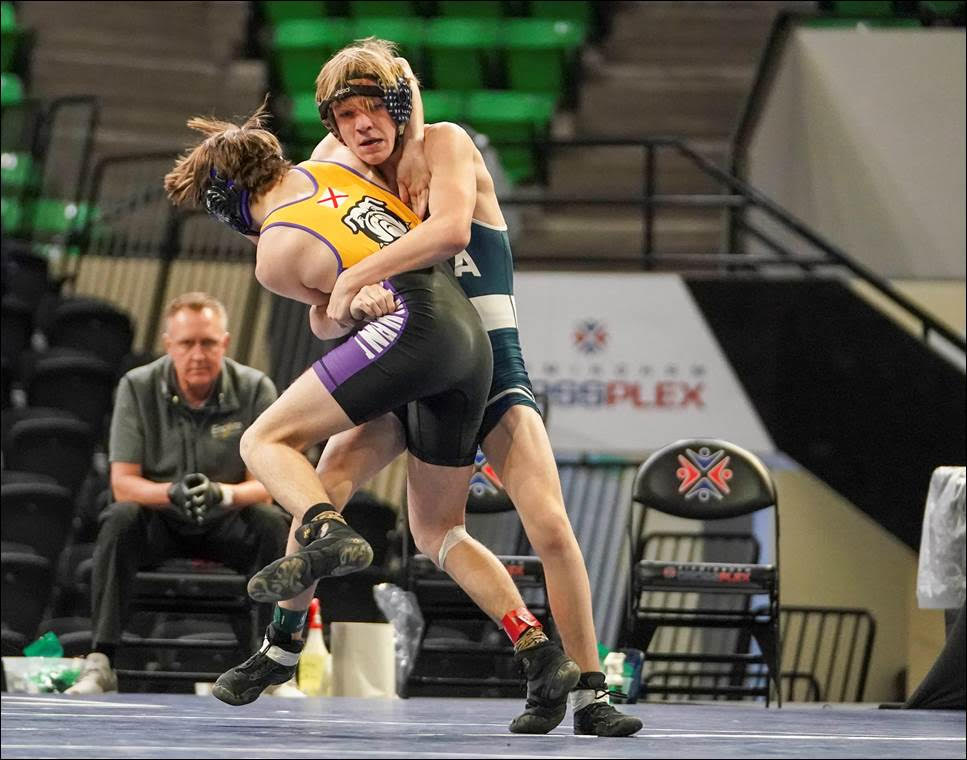 By Josh Bean | For the AHSAA

BIRMINGHAM – Dora High School’s Peyton Hallman and Ranburne’s Cash Ward – and everyone else inside Bill Harris Arena at the Birmingham Crossplex – understood the importance of their 132-pound match Friday. It was the 14th and final individual match of the Class 1A-4A Wrestling Duals championship bout and the title was riding on the outcome.
Dora led 35-31, but Ward still had the chance to flip the script and earn the championship for Ranburne with a pin in the match.
Hallman, a senior, earned a 16-8 decision over Cash in one of the most active and hardest fought matchups of the day, lifting the Bulldogs to a 39-31 team victory for the program’s first state wrestling title.
“I told him before he went out there, ‘You couldn’t write a better movie script than this,’” Dora coach William Keeton said. “By gosh, he answered the call.”
Keeton said he believes this is first AHSAA state title in any sport in Dora High history.
Dora wrestlers won six of the first eight individual matches, but Ranburne rallied by winning four in a row, including pinfall wins by Carson Hall at 285 pounds, Carter Driver at 108 pounds and Brody Horner at 120 pounds. At that point, Ranburne led 31-29 with two matches to go.
Dora’s Jayden Rouse then pinned Ranburne’s Braden Driver in the 126-pound match to regain the lead for Dora, and Hallman closed it out with his 16-8 decision.
“The strategy in that last match was just don’t get pinned,” Keeton said. “That was a close one. It came down to the wire.”
Ranburne, coached by Jason Meeder, finished runner-up in the Duals championship tournament for the second time, having runner-up to Arab in the 1A-5A final in 2020. Dora has defeated Ranburne three times in a dual matches this season.
In the consolation round, the match between Saint James and New Hope also went to the final match. The Indians held a 30-24 lead with two matches to go, but Saint James, coached by Jeff Corley, rallied for the win. Braylen Corley pinned Charles Haywood in the 126-pound weight class, and Logan Hartson pinned Ethan Hunter at 132 pounds to lift the Trojans to a 36-30 victory to earn third place.
New Hope, coached by Josh Nickelson, got a pin by Adrian Waugh at 120 pounds.
The AHSAA Wrestling Duals Championships closes out the Duals Championships with the 5A championship and consolation matches.
All matches are being live-streamed over the NFHS Network’s subscriber-based platform.