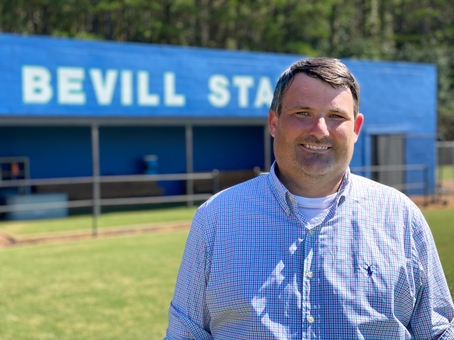 FAYETTE, AL – Bevill State Community College (BSCC) is excited to announce the appointment of Coley Blakeney as the new Head Coach of the Men’s Baseball Team. In January of 2022, Blakeney came to Bevill State to be the pitching coach for the baseball team. During this season, the Bevill State Bears made it to the regional tournament for the first time since athletics returned to the College. The Bevill State Baseball Program is located on the College’s Fayette Campus.

BSCC Athletic Director, Max Weaver stated, “We are very excited to bring Coach Blakeney on board as the Head Coach of our baseball team! He was an integral part of the success that we had last season, and he has been closely involved in the recruitment of most of the players that we have on our current roster. Therefore, the team knows him, respects him, and responds to his instruction. Having graduated from a local high school and played on a former BSCC team, he is very well connected to area high schools and coaches. I believe Coach Blakeney clearly understands our College’s vision and goals for the program and for the future of our student-athletes. I look forward to this season of Bears Baseball under his leadership and tutelage!”

Coach Coley Blakeney graduated from Fayette County High School in 2001. He also attended South Lamar High School before transferring. While at Fayette County High School, Blakeney played baseball and football. During his senior year, the football team had a 13-2 season and were the state runners-up. In baseball, the team had a 33-7 season and finished as the state runners-up. After graduation from Fayette, Coley accepted a baseball scholarship to the University of Alabama. The UA Baseball team had a 51-15 season during his freshman year. Blakeney transferred to Bevill State after his sophomore year at the University of Alabama following shoulder surgery. The 2004 Bevill State team was the first team to make it to the NJCAA Division 1 Region Tournament.

After attending BSCC, Coach Blakeney received his bachelor’s degree in Physical Education from the University of West Alabama. He then coached one season in Division 2 baseball at Stillman College before leaving athletics for the private sector for several years.

Coach Coley Blakeney said of the appointment, “I would like to thank Dr. Joel Hagood and Dean Weaver for the opportunity to become the Head Baseball Coach at Bevill State Community College. Being a Fayette County graduate and a West Alabamian, I feel like Bevill State is home to me. I appreciate the outpouring of support that has been given to me by the community, family, and friends. I cannot tell you how excited I am to have this opportunity. I am confident that we will build a great program that develops great players and competes year in and year out for championships. I am looking forward to working with the administration, community, and players to have a program that will make everyone proud to be a part of Bevill State.”

Bevill State Community College President, Dr. Joel Hagood, said, “Bevill State is looking forward to seeing what happens in the baseball program as Coach Blakeney transitions into this new role. The sophomores are already comfortable with him, and he was responsible for recruiting a large part of the incoming freshmen to the team. Our players are confident about the positive changes his knowledge, skills, and dedication will bring to this program, and so am I. He played a large role in the success of last season. We are fortunate to have him at the College. Go Bears!”