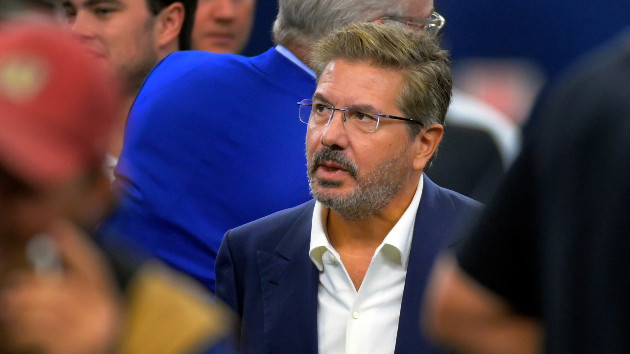 (NEW YORK) — Washington Commanders owner Dan Snyder, along with his wife, Tanya, and the team, has hired Bank of America Securities to consider “potential transactions,” they announced Wednesday.

“The Snyders remain committed to the team, all of its employees and its countless fans to putting the best product on the field and continuing the work to set the gold standard for workplaces in the NFL,” a statement said.

This move comes after many calls for Snyder to step away from the team following multiple allegations and investigations around workplace culture, sexual misconduct and financial improprieties.

An investigation by ESPN published in October detailed allegations concerning how Snyder operates as owner, including the culture created within the team, which was described in the article as toxic.

“I believe there is merit to removing him as owner,” Indianapolis Colts owner Jim Irsay said a few days after that report, according to ESPN.

The Commanders in a statement called Irsay’s comments “unfortunate” for coming “while an investigation is in process, and the team has had no opportunity to respond to allegations.”

“The Commanders have made remarkable process over the past two years,” the statement continued. “We are confident that, when he has an opportunity, to see he actual evidence in this case, Mr. Irsay will conclude that there is no reason for the Snyders to consider selling the franchise. And they won’t.”

Last year, the NFL fined the Washington Football Team $10 million after an investigation found it created a “highly unprofessional” workplace, particularly for women. Snyder’s wife, Tanya, has taken on a larger role in operating the team as these investigations go on.

In response to the toxic workplace claims, the team said, “… she [Tonya Snyder] and Dan will continue to work to improve all aspects of the team — in the front office and on the field.”

The NFL is now investigating Snyder again, this time for allegations of sexual harassment.

A 2020 Washington Post report detailed allegations of mistreatment of women on the cheerleading team. That squad was replaced last year with a coed dance team.

Additionally, the U.S. House Committee on Oversight and Reform is investigating the Washington Commanders over workplace misconduct. Snyder testified behind closed doors in July.

Commanders fans, meanwhile, have not been quiet about their desire for the Snyders to “sell the team,” as they chanted at a recent game.