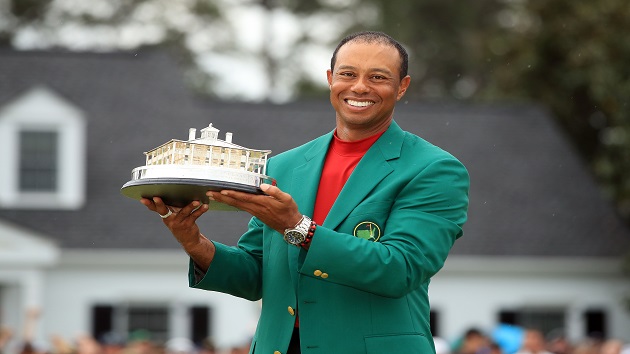 The crash took place at about 7:12 a.m. on the border of Rolling Hills estates and Rancho Palos Verdes, the sheriff’s office said.

Woods was the driver and only occupant, and the only car involved, the sheriff’s office said.

The Los Angeles County Fire Department responded and used a Halligan tool and ax to extricate him, Chief Daryl Osby said during a press briefing Tuesday afternoon. He was extricated through a windshield and taken to Harbor-UCLA Medical Center.

Woods was transported in serious condition, with injuries to both his legs, Osby said. Woods was conscious and able to communicate at the scene, Sheriff Alex Villanueva said at the briefing. He was unable to stand on his own, authorities said.

Woods underwent a long surgical procedure on his lower right leg and ankle after being brought to the hospital, officials said.

He is currently awake, responsive, and recovering in his hospital room.

The area of the rollover has a “high frequency” of accidents, Villanueva said during a press briefing Tuesday afternoon. The car — a 2021 Genesis GV80 mid-size SUV — was found several hundred feet away from the center divider. There were no skid marks, and the amount the car traveled indicates it was traveling at a “greater speed than normal,” the sheriff said.

Investigators will be determining if distracted driving was a factor, the sheriff said. There was no evidence of impairment, he said.

Woods was going to a second day of shooting for sponsor GolfTV with New Orleans Saints quarterback Drew Brees and Los Angeles Chargers quarterback Justin Herbert when the crash took place, according to ESPN. He had been shooting with actor David Spade and former NBA player Dwyane Wade on Monday.

The car hit the center median, crossed into the opposite lane and then hit the curb and a tree, Villanueva said. It also rolled over several times. The front end was “totally destroyed,” and the airbag was deployed, he said.

“Thankfully, the interior was more or less intact, which kind of gave him the cushion to survive what otherwise would have been a fatal crash,” Villanueva said.

Woods also was wearing a seatbelt, which authorities said may have also played a part in saving his life.

“I’ve seen fatal traffic collisions, so I will say it’s very fortunate that Mr. Woods was able to come out of this,” Deputy Carlos Gonzalez, who was the first unit on the scene, told reporters.

The Lomita Sheriff’s Station will be conducting a traffic investigation, which could take several weeks to complete, Villanueva said.

“When I arrived on scene, Mr. Woods was seated in the driver’s seat,” Gonzalez said. “I made contact with him, and I ensured that he was able to speak to me. At that time, he seemed as though he was still calm and lucid.”

Gonzalez added, “I kept Mr. Woods calm. … I asked him what his name was. He told me his name was Tiger, and that moment I immediately recognized him.”

There was a second accident following Woods’ crash — “People being lookie-loos,” the sheriff said — that had no injuries.

The PGA Tour said in a statement, “We are awaiting further information when he comes out of surgery. On behalf of the PGA Tour and our players, Tiger is in our prayers and will have our full support as he recovers.”

Fellow golfing legend Jack Nicklaus tweeted, “We are deeply concerned. We want to offer him our heartfelt support and prayers at this difficult time. Please join us in wishing Tiger a successful surgery and all the best for a full recovery.”

Woods is second all-time in major victories, with 15, behind only Nicklaus’ 18 wins.

Former Presidents Barack Obama and Donald Trump sent their well-wishes to Woods in the hours after the crash.

“[H]ere’s to a speedy recovery for the GOAT of golf,” Obama tweeted. “If we’ve learned anything over the years, it’s to never count Tiger out.”

Spokesman and adviser Jason Miller shared a message from Trump on Twitter, which permanently suspended the 45th president following the Jan. 6 attack on the U.S. Capitol.

“Get well soon, Tiger. You are a true champion!” Trump said in the statement.

Trump awarded Woods the Presidential Medal of Freedom in 2019, and the two golfed together several times during his presidency.

Woods hosted The Genesis Invitational in Los Angeles last week. He wasn’t playing as he’s been recovering from recent back surgery.

Wade posted photos to Instagram Tuesday of him on a golf course with Woods on Monday.

ABC News and ESPN are owned by the same parent company, Disney.