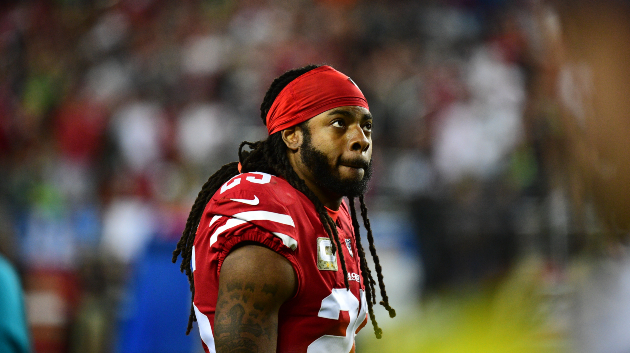 (SEATTLE) — A judge ordered NFL star Richard Sherman be released from jail without bail on Thursday, one day after he was arrested on suspicion of trying to break into his in-laws’ home in Washington state.

Sherman did not appear in court Thursday, where King County District Court Judge Fa’amomoi Masaniai found probable cause that Sherman committed four offenses, including misdemeanor and gross misdemeanor charges of criminal trespass in the second degree.

The other charges against Sherman are malicious mischief in the third degree, and misdemeanor charges of resisting arrest and driving under the influence.

While prosecutors requested $10,000 bail, the judge called Sherman a “pillar of the community,” and said that it was presumed Sherman would be released because the allegations represent his first arrest. The 33-year-old Sherman was also ordered not to have contact with his father-in-law, not possess a weapon, and not use alcohol or non-prescription drugs.

“I love and support my husband,” Sherman’s wife Ashley Sherman said in a statement Thursday. “I am committed to helping Richard get the support and care that he needs. Richard has always been a loving father and husband. And we are looking forward to seeing him at home with his family.”

Police reports indicated that Sherman was belligerent, had been drinking heavily, and spoke of killing himself when he left his home late Tuesday night. His wife called 9-1-1 to try to have police stop him.

He was later arrested after having crashed his car in a construction zone along a busy highway and then attempting to break into his in-laws’ home.

Sherman’s father-in-law, Raymond Moss, told officers that he armed himself with a handgun and used pepper spray to protect his family from Sherman, who had tried to break down the door of their home with his shoulder.

He told officers that he was upset over his children being taken from him. When the officers directed him to kneel down to be handcuffed and placed under arrest, they say Sherman ignored those commands and became increasingly hostile. A K-9 unit was eventually used to help apprehend Sherman.

King County prosecutors and the sheriff obtained an “extreme risk protection order” for Sherman in February, which barred him from having guns. That came after a judge had determined that he posed a danger to himself or others.

Ashley Sherman told police that her husband has been on antidepressants and was receiving mental health counseling.

Bucks bounce back at home, top Suns in Game 3