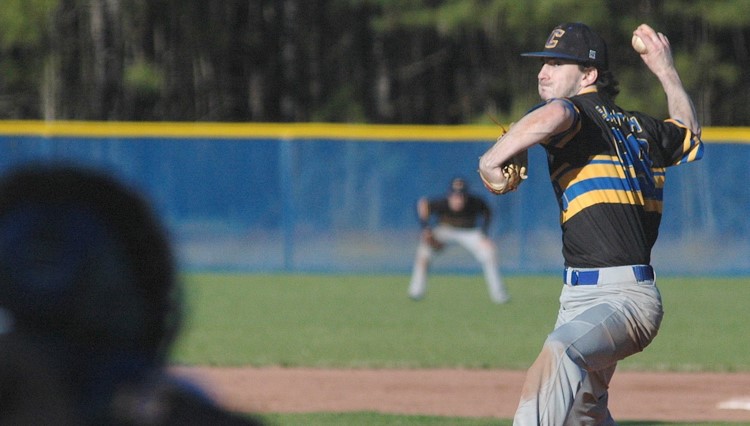 OAKMAN — Basketball is a game of runs.

So is baseball. At least that was the case in Wednesday’s Walker County Baseball Tournament matchup between Curry and Cordova. The game included six lead changes with Curry finally going ahead for good in the bottom of the sixth inning in a 15-12 victory over the Blue Devils at Oakman High School.

Two games will be held today at Oakman with Carbon Hill facing the host team at 4:30 p.m. and top-seeded Dora playing the winner at 6:30 p.m.

On Wednesday, Cordova jumped out to a 4-0 lead in the first inning on RBI hits from Gabe Gross and Andrew Hunt. The Blue Devils led 5-0 going into the bottom of the third. Curry pushed across eight runs in the inning to grab an 8-5 lead. The Jackets took advantage of six hits, a hit batter, a walk and an error in the frame.

Cordova struck for five runs in the fifth inning to retake the lead at 10-8 only to have the Jackets go ahead 11-10 going into the sixth inning.

The Blue Devils regained the lead in the top of the sixth at 12-11 behind one hit, an error and two walks, but Curry again rallied, scoring four runs in the bottom of the sixth to earn the win.

Cade Miller came through with the game-winning hit in the bottom of the sixth with a two-run single that drove in both Nic Bankston and Brayden Davis for a 13-12 lead. Luke Smith added an RBI single and later scored on a wild pitch for the final run.

Smith got the win, allowing two unearned runs and striking out four in two innings of work.

For Carbon Hill (2-1), Braden Amerson was 1 for 3 with a run and both Caleb Kilgore and Laney Keeton had hits. Larry Terry took the loss for the Bulldogs.

Mortimer Jordan broke open a pitcher’s duel with a 10-run top of the seventh inning as the Blue Devils beat Jasper 10-2 at Valley Park on Wednesday.

Dalton Dockins had the highlight for the Vikings, belting his second home run of the season.

Mayson Slaughter and Carson Alvis both went 1 for 3 and Ayden Payne scored a run.

Bison pull away from Bears in second half

No. 6 Alabama holds off Mississippi State 64-59 to win SEC