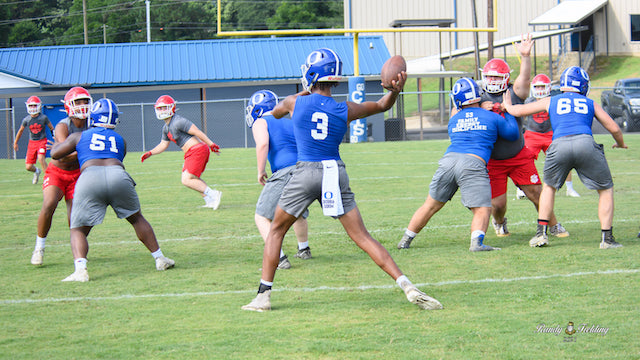 The Oakman Wildcats finished their 2020 campaign with a 7-4 mark and playoff berth, with plenty of memorable plays made throughout the season.

While 2020 represented a decade-long standard of the Wildcats making a postseason bid, it also showed the amazing potential that lay within the team — potential that could be fully realized in 2021.

Two of Oakman’s losses were by less than a touchdown in region play — 41-35 to Winfield and 20-17 to Vinemont, both on the road and in overtime — while the other two losses came to Class 3A State champion Fyffe and Class 4A State runner-up Gordo.

The exciting news for the Wildcat faithful that watched their team come dangerously close to clinching an undefeated season in Class 3A, Region 6 is the returning talent and experience that will be featured in 2021.

Three juniors in 2020, A.J. Odom, Kaedyn Marchbanks and Denzel Chatman, were named to the Class 3A All-State team by the Alabama Sports Writers Association — Odom and Marchbanks to the First Team and Chatman to the Second Team.

While the trio form a nucleus of returning leadership, Oakman will host playmakers across the roster.

Back for his second season at quarterback will be Baylor “Bubba” Odom, who overcame a tough first start under center against Gordo to emerge as one of the area’s top play callers. Lining up in the backfield is the returning Sean Douglas, a dangerous runner and reliable scoring threat.

The receiving corps is daunting with Chatman, Marchbanks, Derrick Hubbard and A.J. Odom at tight end.

The line for Oakman, traditionally known as a strength on an annual basis, won’t disappoint with returners Hunter Davis, Trey Thomas and Nick Handley.

Both Odoms are among the top playmakers on defense along the line and shifting back into linebacker corps. In his junior season, A.J. recorded 105 tackles with 26 tackles for a loss, 10 quarterback sacks, forced four fumbles and had two fumble recoveries.

Will Marshall and Jy Henderson join Handley to form the Wildcats’ linebacker group.

Marchbanks and Chatman, along with Douglas, will feature prominently in the secondary.

Oakman’ Hall: Plenty of progress made during offseason