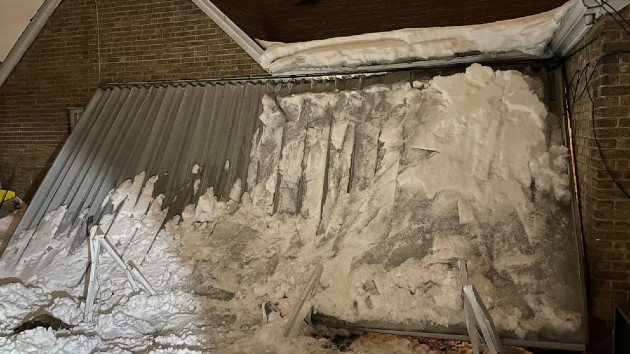 (CHICAGO) — A woman is lucky to be alive after being trapped for more than 10 hours under an awning in her own backyard when it collapsed on top of her after being weighed down by heavy ice and snow.

The incident happened at approximately 12 p.m. on Monday, Feb. 22 in Schiller Park, Illinois, a suburban community in northwest Chicago, when an unnamed woman in her 50s had gone outside to shovel snow in her backyard and the awning of her home suddenly gave way and came down on top of her, according to the Schiller Park Fire Department.

“She was trying to call for help, but being her head was inside of the awning, nobody was able to hear her,” Chief Michael Cesaretti of the Schiller Park Fire Department told ABC News’ Chicago station WLS-TV in an interview about the accident.

The woman spent more than 10 hours trapped by the awning and under several feet of ice and snow in temperatures hovering around the mid-40s, far warmer than a week previous when the temperatures were between 4 and 19 degrees Fahrenheit in the region.

Firefighters told WLS following the accident that if this had happened last week, the outcome could have been much more serious and that the warmer temperatures most likely saved the victim from injuries related to being out in the cold for an extended period of time.

The woman was finally discovered when a relative arrived at approximately 10:30 p.m. and found her, according to WLS.

“Most of the snow was on top of the awning, and it did create a bit of a void space under the awning so she was able to still communicate,” Cesaretti said.

The woman remained conscious the entire time and was subsequently transported to Lutheran General Hospital in Park Ridge, Illinois, in stable condition.

Firefighters told WLS that they hope this incident will be a reminder to people to be aware of their surroundings.

“There may be no warning signs,” Cesaretti told WLS. “So we’re just asking people to be aware, what’s over your head.”

April snowstorm for the Northeast and Central US, more severe weather for South

Gun violence continues in Philadelphia after 11 shot in 24 hours