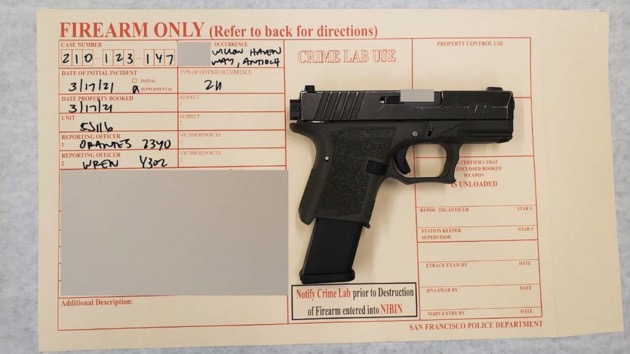 (SAN FRANCISCO) — Three people have been arrested for robbing and attacking a 67-year-old Asian American man in a San Francisco laundromat in February.

The three suspects launched the attack on Feb. 23 around 10 p.m.

The attack was caught on surveillance video, which showed the shocking moment the trio kicked the man, who appeared to be alone in the laundromat, dragged him from his chair onto the ground, and ran through his pockets.

The suspects robbed the man of several hundred dollars in about 45 seconds, San Francisco ABC station KGO reported. The victim was treated for non-life threatening injuries.

Police took the suspects into custody on March 17. The suspects were wanted in connection to multiple auto burglaries in the area that took place before the laundromat robbery, police said.

They were booked on charges of burglary, robbery, elder abuse, fraudulent use of a credit card and assault likely to produce great bodily harm.

Police said they seized evidence related to the robbery including clothing, a window punch and two firearms.

The investigation is ongoing.

Crimes against Asian Americans have spiked in the last year, reported to be fueled, in part, by the coronavirus pandemic’s suspected origins in Wuhan, China.

There were nearly 3,000 hate incidents against Asian Americans in 2020 alone, according to data from the Stop AAPI Hate coalition, which set up a website to help track the cases, some of which were not reported to police.

The group, which says it started to operate last year in response to an increase in discrimination, does not have statistics for 2019, but for context, in that year, there were 158 incidents of reported anti-Asian bias crimes in the U.S., according to FBI hate crimes data.

Man arrested for alleged sexual assault of Asian woman, suspected of other attacks