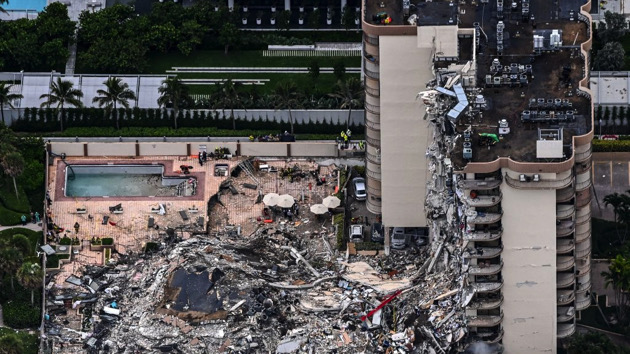 (SURFSIDE, Fla.) — One year has passed since a condominium tower in Surfside, Florida, collapsed and killed 98 people in the early morning hours of June 24 — but experts, officials, and those who lived through the disaster say there’s still a long way to go to ensure the safety of other buildings in South Florida.

“We can’t solve a problem when we don’t know what the problem was,” Charles Burkett, Surfside’s mayor at the time, told ABC News as the town prepared to mark the first anniversary of the deadly collapse.

The failure of Champlain Towers South was the single deadliest structural disaster, not caused by terrorism, in American history. And Burkett still remembers the fear that gripped his community in the aftermath.

“I can’t answer their question, when they ask me, ‘Is the building safe?"” Burkett said last year.

Following the disaster, as officials and experts were assessing what caused the collapse and trying to reassure terrified neighbors, town officials told building owners and residents to get their properties inspected.

Twelve months after the tragedy, an ABC News investigation has found that efforts to go back and have the town inspect its aging buildings have been limited — even as federal investigators say they still do not know what caused the collapse.

‘I don’t ever want to see this happen again’

The devastation at Champlain Towers South was — quite literally — a wake-up call for many.

“I couldn’t believe it. As a structural engineer, I could not believe that a building could just collapse without any external force,” said Dawn Lehman, a professor of civil and environmental engineering at the University of Washington retained by the Miami Herald to help the newspaper investigate the collapse.

“There wasn’t a hurricane. You know, there wasn’t a wind storm. There wasn’t a flood,” Lehman said. “So I was very concerned. And I said to myself, ‘I don’t ever want to see this happen again. And I want to do everything that I can to prevent it from happening."”

In the wake of Champlain Towers South’s collapse, there was a rush to reexamine the safety of other buildings in the area as government leaders pledged their agencies would do what was necessary to give their residents peace of mind.

Within six months of the collapse, Miami-Dade County received nearly 100 building safety complaints from the public, with residents complaining about cracks in structures, leaks in roofs, and delays in their mandatory 40-year recertification process, according to records obtained by ABC News. At least a dozen of those complaints specifically said they don’t want “the Surfside situation” to occur in their buildings.

Exactly a week after the Champlain tower fell, the Town of Surfside announced an aggressive effort to strengthen safety rules for buildings within its borders, imploring owners of buildings over 30 years old and taller than three stories to promptly have them reinspected. At the time, a Miami-Dade County ordinance only required that buildings be inspected and recertified after 40 years.

The town even offered inspections from Allyn Kilsheimer, a structural engineer based in Washington, D.C., who was hired to investigate the collapse and help assess the conditions of other buildings within town limits.

But as of this week, the town has only inspected 10 out of 30 buildings that fall within those guidelines, Surfside building official James McGuinness told ABC News. McGuinness said the town does not have the authority to mandate an inspection unless a building is approaching its 40-year recertification deadline or there is evidence of safety issues.

“Can the processes be done better? Absolutely,” said former Mayor Burkett when asked if building owners have been given the resources they need to make sure their buildings’ infrastructure is secure.

The town’s 10 inspections found deficiencies in two buildings, both of which are now being addressed, McGuinness said.

One of those buildings, the Marbella, sits at 9341 Collins Avenue, just five blocks from the site of Champlain South. It was built in 1989, but went through a full inspection process last year before the 40-year mark.

Moshe Schneider, president of the Marbella’s condo board, told ABC News that ownership was able to work with various engineers to proactively find concrete structural damage and get it fixed. But Schneider said his building might be an exception. More needs to be done, he said, to make inspections and maintenance accessible and affordable to all building owners.

“You’re talking about unfunded mandates,” Schneider said. “It sounds good, everybody get inspected the week after you open. [But] who’s going to pay for it? How are you going to do it?”

Surfside Commissioner Marianne Meischeid is a resident of Four Winds condo, the other high-rise whose owners are working with the town to fix structural problems that were found during the recent inspections.

“The perception of the condo board and the property manager in my building was that the town is slow in processing the permits,” said Meischeid. “But now I can see that they’re doing everything, and it’s a matter of communication once they communicate back to the condo board with their comments.”

ABC News visited eight oceanfront buildings in Surfside during the spring, and found several property managers, building staffers and condo residents who said their building was on a waiting list for inspection, or that they were in the process of arranging to have the building inspected on their own.

“You only have a limited number of structural engineers that are being pulled in every direction,” said David Haber, a lawyer who represents condo associations in Florida. “Boards are contacting engineers constantly, saying, ‘Please check my building.’ It has taken longer for some than others.”

Some building managers, owners and residents expressed frustration at what they felt was a disorganized oversight system that leaves building owners and condo boards on their own.

“One of the problems in condominium law is that you have nonprofessional board members who may be trying to do their best as unit owners to meet their fiduciary duty,” said Haber.

Meischeid said nonprofessional condo board members are often reluctant to spend the money necessary to maintain their buildings.

“Many are retired and on fixed incomes, and then the structure of the board as a committee of a handful of people representing the association of 100 people is not conducive to clear and timely decisions,” he said.

Champlain Towers South, which was going through to its 40-year recertification process when the collapse occurred, was dealing with a similar conundrum: Despite an alarming assessment in 2018 by an engineering firm that warned of “major structural damage” in the pool deck area, the condo board reportedly squabbled over assessment costs and underfunded reserves, contributing to years-long delays in its repairs.

By the time its recertification deadline was approaching, the building was facing a massive $15 million worth of repair work that was necessary to bring it up to code. Due to its lack of financial reserves, however, the condo board reportedly struggled to secure money for repairs until just three months before the collapse.

While some have pointed to delays in the repairs and further deterioration as likely culprits in the Surfside collapse, investigators have yet to issue any official conclusions.

The National Institute of Standards and Technology said earlier this month that a year into their investigation, engineers and construction experts still have “numerous active hypotheses,” including the corrosion of the reinforcing steel in the plaza slab of the building — but no leading theory about what caused the collapse.

Kilsheimer, the engineer who’s conducting a parallel investigation for the town, said, “I think we will be able to eliminate a number of causes,” but “I don’t know if we can ever get it down to a single cause.”

On the positive side, in recent weeks there’s been movement in revising what many believe to be antiquated state regulations governing high-rises built along the unforgiving South Florida coastline. The state legislature passed a long-contested building-safety reform bill that would require condo associations to maintain financial reserves, and the legislation has been signed by Gov. Ron DeSantis. The new law also requires all coastal high-rises to undergo structural and electrical inspections and recertification after 25 years, and all other high-rises in the Sunshine State to be reinspected at the 30-year mark.

After those inspections, buildings would then need to be recertified every 10 years, according to the new law.

Prior to the passing of this legislation, Miami-Dade and Broward counties were the only ones in the state with any recertification requirements whatsoever — and their rules were pegged to the 40-year mark.

“It took a lot of work to have a law signed, especially before the one-year mark,” said Martin Langesfeld, whose sister Nicole died in the Surfside collapse. “It was shocking that a family member had to push and beg for legislation to be changed, [with] doors getting shut in your face, legislators looking the other way, lawmakers ignoring you.”

Even so, critics say the new state law still doesn’t go as far as recommendations that were issued in December 2021 by a Florida grand jury impaneled to investigate the Champlain Towers South collapse. That panel, in Miami-Dade County, suggested that buildings undergo structural and electrical inspections between 10 and 15 years after their construction.

“[The new law] won’t solve every problem. We know that,” Langesfeld said. “But it’s a great start. It took a few more months than it needed.”

When asked by ABC News if enough legislative action has been taken, state Sen. Jason Pizzo, whose district includes Surfside, said, “No, because you can’t just change the law and then send mandates and burdens down without the infrastructure to support it.”

“If you’re going to go and make a significant change in the law, you have to contemplate the necessary support systems and mechanisms that have to be in place,” he said.

Foul fumes in South Jersey have been contained and identified, officials say

Three dead after home explodes in Indiana, officials say; cause under investigation

Three people dead after home explodes in Indiana, officials say; cause under investigation

3 people dead after home explodes in Indiana, officials say; cause under investigation