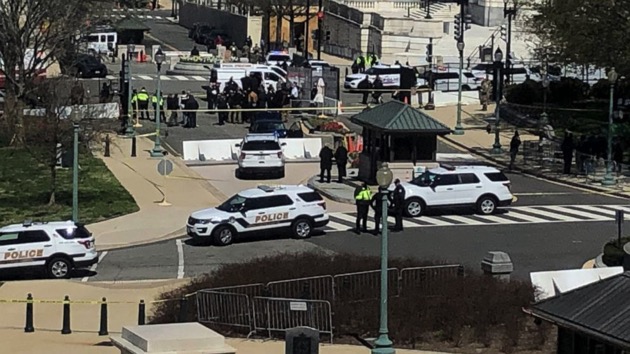 (WASHINGTON) — One of two injured U.S. Capitol Police officers has died after being hit by a suspect who then rammed their car into the north barricade of the Capitol complex Friday afternoon before exiting the vehicle with a knife, Acting Chief Yogananda Pittman said at a press conference.

Police opened fire and the suspect is dead, Pittman said.

“The suspect exited the vehicle with a knife in hand. Our officers then engaged that suspect. He did not respond to verbal commands,” Pittman said. After the suspect lunged at officers, they “fired upon the suspect.”

The officers who died of injuries sustained at the scene has been identified as 18-year Capitol Police veteran William “Billy” Evans.

“He began his USCP service on March 7, 2003, and was a member of the Capitol Division’s First Responder’s Unit. Please keep Officer Evans and his family in your thoughts and prayers,” Pittman said.

The Capitol was put on lockdown Friday afternoon. Hill staffers were sent a message from U.S. Capitol Police around 1:20 p.m. saying that “due to an external security threat … no entry or exit is permitted.” The message said people could move around inside the building “but stay away from exterior windows and doors. If you are outside, seek cover.”

Law enforcement officials still are investigating a possible motive for the attack.

“We do not have the suspect on file with U.S. Capitol Police,” Acting Metro Police Department Chief Robert Contee said. “So there is no indication at this time that there is any nexus to any member of Congress.”

Congress was in recess when the incident occurred, and many staff offices were closed in observance of Good Friday.

There were approximately 2,300 National Guardsmen already on mission at the Capitol following the violent riot on Jan. 6, when protesters breached the Capitol — five people died, including Capitol Police officer Brian Sicknick.

The D.C. National Guard deployed an “Immediate Reaction Force” to support Capitol Police during Friday’s incident, according to a spokesperson.

About 40 National Guardsmen lined up with riot gear to block access to Constitution Avenue, just east of where the incident took place. Capitol Police and the National Guard also blocked off roads and pedestrian access near the Supreme Court.

White House press Secretary Jen Psaki said that President Joe Biden, who is at Camp David for the holiday weekend, is aware of the incident. House Speaker Nancy Pelosi ordered flags lowered to half-staff in honor of the officer who died, a spokesperson for Pelosi said in a tweet Friday.