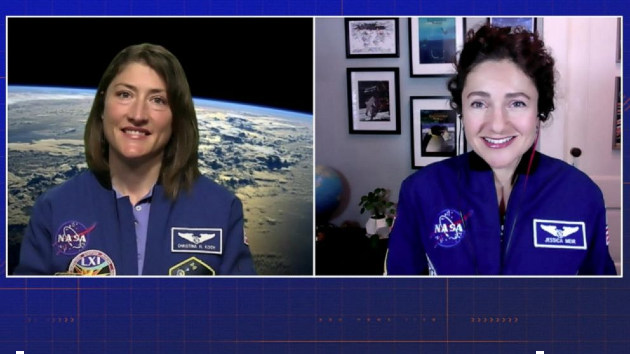 (NEW YORK) — Just two years after they made history conducting the first all-woman spacewalk, Christina Koch and Jessica Meir are hoping to be the first woman — or women — on the moon.

In 2024, NASA is working to get humans back on the moon with its Artemis lunar exploration program. Meir says the program is about humankind’s inherent desire for exploration and all the unanticipated benefits from it that will help push science forward.

“We are still learning new things every day from the samples we brought back from the Apollo missions with newer technology,” Meir said of the missions, which spanned from 1963 to 1972.

“For all of the STEM fields — science, technology, engineering, math — there were so many resources put behind all of that back in the Apollo program that we saw a huge burgeoning of all of these industries that had ramifications and effects and benefits well outside of the space sector as well. So, we can really expect this from the Artemis program as well,” she said.

Koch also said research from Artemis will help us get closer to the goal of exploring Mars.

“This is really a stepping stone to [the] eventual exploration of Mars, and even deeper into our solar system, and getting a chance to really explore some of those deep philosophical and scientific questions that we have,” she said. “Are we alone? Is there life, precursors of life or evidence of life once on Mars out there? Really big things that have some potential to change how we see ourselves in the world and in the universe.”

The astronauts selected for the Artemis missions will work on different aspects of the mission for NASA, such as developing new spacesuits, Meir said.

“Our particular training for the first missions has not yet started, even though we’ve identified the cadre of NASA Artemis astronauts. Generally, we don’t assign people until about a year-and-a-half to two years before the mission,” she explained. “That’s when the really specialized training will start, and then you can expect … all of those crew members to be heavily involved in all of the scientific objectives, all of the different hardware, the spaces that they’ll be using, and that will be some full-time training at that point.”

Both women have gone through this process. In October 2019, they conducted the first all-woman spacewalk from the International Space Station together. They were tasked with replacing a controller that regulates the batteries that store the station’s solar power. The mission lasted seven hours and 17 minutes.

“Men’s physiology, perspectives, values, measurements, comfort and ambitions have mostly been the default template for designing major human endeavors,” Jemison said. “I believe that Koch and Meir, by their sheer skill and execution, shift us closer to a template based on intelligence, agility, capability, integrity, courage and excellence.”

Koch says it’s difficult to imagine all the ways the first woman on the moon will impact girls around the world.

“It’s a time when we are recognizing those that came before us,” she said. “We are inspiring future generations and we’re doing it all in a time when we collectively recognize how important it is to explore for all and by all… So it’s exciting to be a part of a mission at a time when we’re ready to take every talent, every innovative idea that’s out there and apply it to mission success and see what we can do together.”

How to see the “Super Flower Blood Moon,” 1st lunar eclipse of this decade