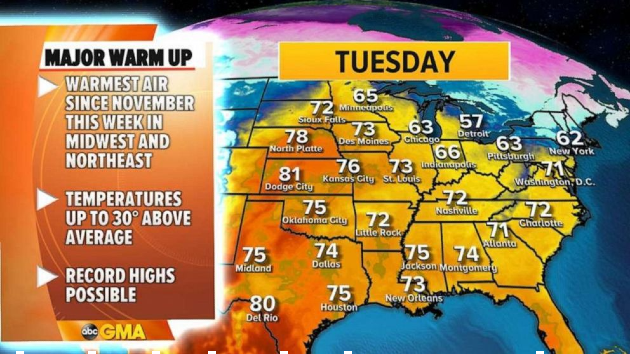 (NEW YORK) — The mild air continues to build across the Central U.S. and will expand into the parts of the East Coast on Tuesday.

Record highs are possible Tuesday across the upper Midwest and into parts of the high Plains from the Texas Panhandle to northern Minnesota.

Afternoon temperatures could be up to 30 degrees above average with widespread temperatures in the 70s and even the 80s expected in the Central U.S. and even northern locations like Minneapolis and Chicago will be in the 60s.

On Tuesday, the mild air expands into parts of the East and there is a forecast high of 62 in New York. The last time New York was in the low 60s was in December.

For the Northeast, however, this is only the beginning. Temperatures will head into the upper 60s, and maybe even some 70s, on Thursday and Friday making this easily the warmest air since November for the region.

Unfortunately, the stretch of mild and relatively calm weather across the U.S. is about to end as a Pacific storm will bring much needed rain and snow to California on Tuesday.

Locally, over 1 inch of rain will be possible in Los Angeles through Thursday which could cause some flooding and debris flows in the area.

In the Southern California mountains, locally up to foot of snow will be possible.

As this storm slowly moves inland, it will spread snow into other parts of the intermountain West with locally over a foot of snow possible across the mountains.

Meanwhile, on Wednesday and into Thursday, a new storm will quickly develop and race north in the Central U.S.

This storm will bring snow to parts of the northern Plains, including places that are in the 60s and low 70s Tuesday. All snow should stay north and west of Sioux Falls, South Dakota and Minneapolis.

The storm will also set off some severe weather across parts of Kansas and northern Oklahoma on Wednesday evening and gusty winds and hail will be possible.

Then on Friday and Saturday, the storm from California will move into the southern Central U.S. and likely become a wide ranging impactful storm.

The impacts include a potential major snowstorm for Colorado where temperatures Tuesday are well into the 60s across the front range.

Additionally, there will likely be a multi-day severe weather threat in the southern Plains, including the threat for tornadoes while more rounds of rain will spread across Oklahoma to Indiana which could cause flooding.