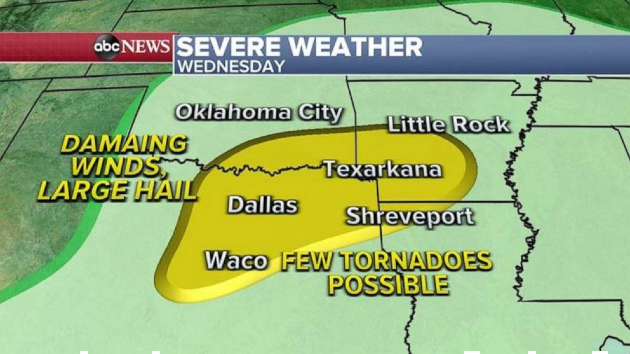 (NEW YORK) — The South is bracing for a severe weather outbreak, including some of the same areas that got hit with tornadoes last week.

Those areas could see more long-track, strong tornadoes in the next 48 hours.

The new storm will move out of the Rockies and into the South with more severe weather over the next few days.

Later Wednesday, damaging winds, large hail and a few tornadoes will be possible from Dallas into Little Rock, Arkansas, and south to northern Louisiana.

This storm system will move east into the Tennessee River Valley and the Deep South by Thursday, with a significant tornado threat from Memphis, Tennessee, to Birmingham, Alabama, and down to Jackson, Mississippi.

The National Oceanic and Atmospheric Administration’s Storm Prediction Center is warning that tornadoes on Thursday could be long-track and strong.

With these storms moving over the same areas already hit, they could produce more flash flooding for the South, where locally another half a foot of rain is possible from Mississippi to Alabama.

Tuesday’s storm brought more than 10 inches of rain to Houma, Louisiana, which is just southwest of New Orleans. Numerous streets were flooded and some vehicles were stalled in floodwater.

Additionally, severe thunderstorms brought damaging winds from Iowa to Mississippi, where winds gusted over 60 mph. This produced damage to buildings, while uprooting trees and power lines.

Elsa churns up deadly tornadoes as it charges up East Coast: Latest path