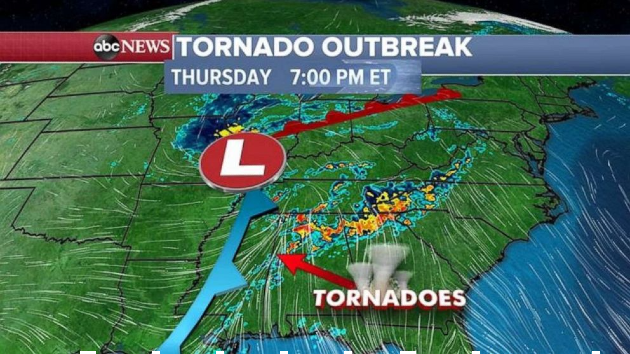 (NEW YORK) — At least six people are dead in the Deep South after tornadoes tore through the region on Thursday.

Five people lost their lives in Calhoun County, Alabama, after the state was hit with 17 reported tornadoes.

A long-track tornado may have been on the ground for roughly 100 miles Thursday, according to the National Weather Service in Birmingham.

At least 23 tornadoes were reported across Mississippi, Alabama and Georgia.

The biggest threat for tornadoes will be from Arkansas to northern Mississippi and into Tennessee on Saturday. The threat includes cities such as Memphis and Nashville and just north of Tupelo, Mississippi.

By Sunday, the severe weather risk will move into the Southeast and Mid-Atlantic. Major cities like Atlanta, Raleigh, North Carolina and Washington, D.C., could see damaging winds, large hail and even an isolated tornado.

Toddler falls from window of home, mauled to death by family’s 2 pit bulls when he lands

Darnella Frazier, who recorded video of George Floyd’s death, recognized by Pulitzer board