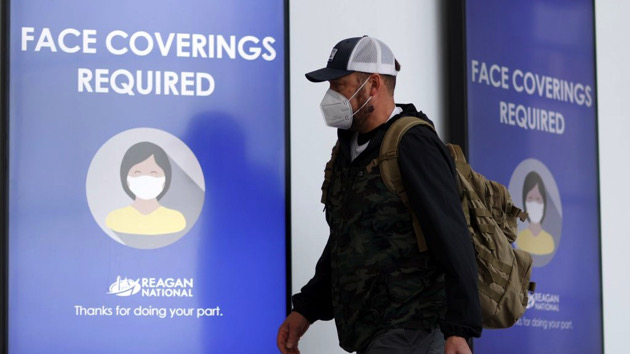 (ATLANTA) — The Centers for Disease Control and Prevention has decided to extend the federal mask mandate for planes and trains until May 3, the agency announced on Wednesday.

The current mandate was set to expire this coming Monday, April 18. Citing the rapid spread of an Omicron subvariant, BA.2, which now makes up more than 85% of COVID cases in the US, the CDC said it needed more time to monitor a recent uptick.

“In order to assess the potential impact the rise of cases has on severe disease, including hospitalizations and deaths, and health care system capacity, the CDC Order will remain in place at this time,” the agency stated.

Many of the nation’s airlines have pushed hard to have the government lift the mandate.

Last month, CEOs of all major U.S. airlines wrote to the administration to stop requiring masks on planes.

“It makes no sense that people are still required to wear masks on airplanes, yet are allowed to congregate in crowded restaurants, schools and at sporting events without masks, despite none of these venues having the protective air filtration system that aircraft do,” the business executives wrote.

The group said the burden of enforcing the mask mandate has fallen on their employees, saying, “This is not a function they are trained to perform and subjects them to daily challenges by frustrated customers. This in turn takes a toll on their own well-being.”

Just before the extension was announced, the head of the group that lobbies on behalf of all major U.S. airlines, doubled down on the call for getting rid of mask and pre-departure testing requirements.

“Neither restriction is currently supported by data and science in today’s public health environment,” Nick Calio, CEO of Airlines for America, said in a letter to administration officials.

3 hospitalized after plane lands and catches fire in Miami

At least 3 dead, 23 injured as wave of weekend mass shootings in US continues