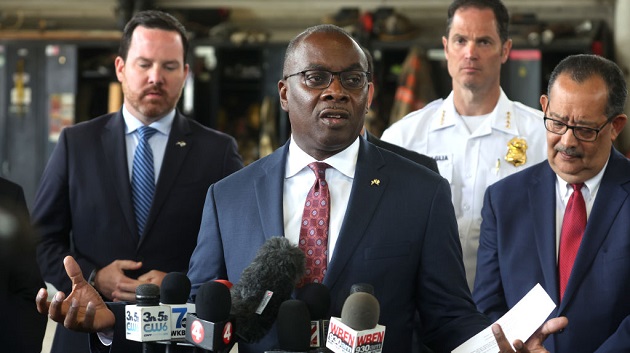 (BUFFALO, N.Y.) — The Supreme Court’s ruling Thursday striking down a New York State law limiting the right to carry a concealed handgun in public is drawing criticism from many in the state, including Buffalo Mayor Byron Brown.

“It is a disappointment and it is a dark day for sensible gun reform in this nation,” Brown told ABC News’ Linsey Davis during an interview for ABC News Live Prime.

This ruling comes weeks after 10 African Americans were gunned down on May 14 in a racially motivated mass shooting at a Tops supermarket in Buffalo, New York, and after many other mass shootings in the country. Brown added the ruling would only add to gun violence in the country and be another hurdle for law enforcement.

“I do see a concern for law enforcement. They will not know who is legally permitted to carry a weapon if there are more weapons being carried in a concealed fashion in the city of Buffalo, and across the state of New York and other communities across the country. It will make the job of law enforcement a lot more difficult,” Brown said.

While Brown is criticizing the ruling, other New York lawmakers are praising the decision.

“Far too many innocent Americans are losing their lives to gun violence. We don’t want to take away the rights of responsible gun owners. We certainly do not want to infringe on the Second Amendment, but it does make sense for there to be sensible gun reform that does not infringe on the rights of responsible gun owners and at the same time keeps average innocent Americans safe from unnecessary gun violence,” he said.

This ruling also coming on the heels of what could potentially be historical bipartisan gun reform legislation passage in Congress, gaining support from 15 Senate Republicans, including Senate Minority Leader Mitch McConnell.

“The timing of this ruling is very difficult, particularly when you have a bipartisan group of United States senators that have advanced sensible gun reform after years of inaction in the Congress,” Brown said.

Legislation that was pressed upon after several mass shootings, most recently in Uvalde, Texas, would be the first time in nearly 30 years that Congress has acted on gun reform.

“It took tragedies like the mass shooting, the act of domestic terror that took place in Buffalo on May 14, and other mass shootings since that time to finally get Congress to take some action– and on the day when we are seeing further movement in Congress on sensible gun reform, this ruling comes down from the United States Supreme Court. It is a disappointment,” Brown said.

Trump Organization CFO due in criminal court on tax evasion

Highland Park shooting suspect to appear in court for arraignment