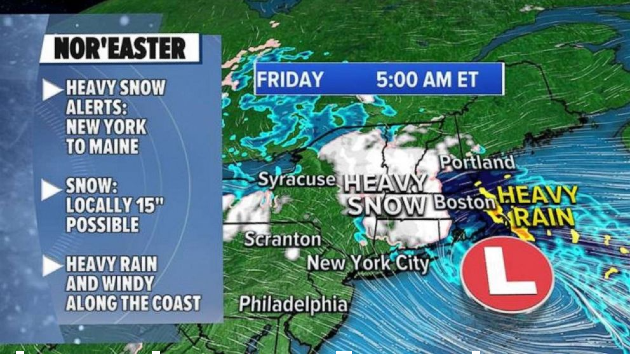 (NEW YORK) — An April snowstorm is raging in the Rockies, Plains and the Northeast, with some areas getting more than a foot of snow.

Snow will continue Friday in the central and southern Rockies, all the way to New Mexico, where some areas could see up to a foot of snow.

Meanwhile in the Northeast, a nor’easter is bringing heavy snow from upstate New York into New England, where a winter storm warning and winter weather advisory have been issued.

Already, 4 inches of snow fell north of Worcester, Massachusetts, and up to 2 inches in Hunter, New York. There is more snow to come for New England as this spring nor’easter moves through. Some higher elevations could see up to 15 inches of snow.

Along the I-95 corridor, it will be mostly rain and gusty winds with chilly temperatures in the 40s and 50s on Friday.

Numerous accidents were reported in Colorado on I-70 Thursday, which shut down the interstate overnight.

In the South and the Gulf Coast, strong storms and flooding will continue into Saturday.

A flash flood watch has been extended into Saturday due to an additional 4 inches of rain that could cause more flooding.

Some areas in southern Louisiana have already seen up to half a foot of rain in the last 24 hours, which caused flooding of streets and neighborhoods.

Now this storm will move along the Gulf Coast Friday afternoon into Saturday morning, bringing severe weather and heavy rain with it.