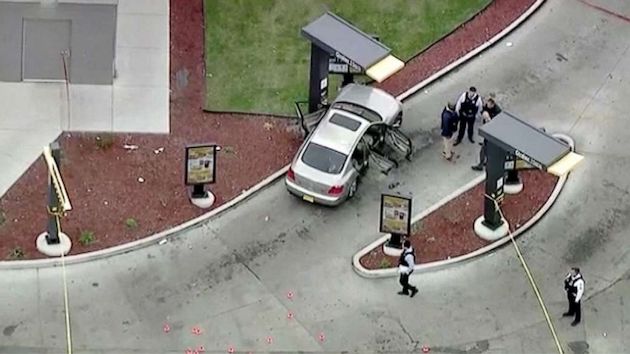 (CHICAGO) — An 18-year-old man is expected to appear in court on Sunday to face murder charges in the fatal shooting of 7-year-old Jaslyn Adams, who died in a hail of bullets fired into her family car while waiting in a McDonald’s drive-thru in Chicago, police said.

The killing of the young girl, whose father was wounded in the barrage of gunfire, rocked the city of Chicago prompting an angry Mayor Lori Lightfoot to condemned the “unthinkable act of violence” and saying the city’s “epidemic of gun violence cutting our children’s lives short cannot go on.”

The suspect, Marion Lewis, who was under surveillance by police in a western suburb of Chicago, was arrested on Thursday after he was allegedly involved in a car chase that ended with a crash on a freeway and a shootout with police that left him wounded, according to Chicago Police Department Superintendent David Brown.

Lewis, who was later announced as a suspect in the McDonald’s shooting, is just one of several suspects in the killing of Jaslyn, who was shot in broad daylight a week ago today on Chicago’s West Side, Brown said.

“You can run but you can’t hide,” Brown said at a news conference Saturday of the other suspects wanted in the killing of the little girl. “We are going to bring you to justice for this crime. The Adams family deserves nothing less.”

Brown declined to say how many other suspects are wanted in the murder.

“We are limited in what we can say because we have other offenders to bring in on this horrific crime,” Brown said.

He applauded the work of Chicago police detectives and suburban police departments who helped apprehend Lewis.

Brown said police had Lewis under surveillance and tried to pull him over when he allegedly tried to ditch officers following him on the Eisenhower Expressway in Chicago and a chase ensued. He said that Lewis crashed the stolen car he was driving on the shoulder of the freeway, then allegedly tried to carjack a family stalled in traffic.

Lewis allegedly shot at police before officers returned fire, hitting him in the arm, according to the Illinois State Police, which will lead the investigation of the freeway incident.

In addition to first-degree murder and attempted murder for the killing of Jaslyn and wounding her father, Lewis is also facing a slew of other charges including aggravated assault on a police officer, robbery, aggravated vehicular hijacking, multiple counts of aggravated discharge of a gun, unlawful restraint and possession of a stolen vehicle.

Lewis is expected to appear in court on Sunday for a bond hearing.

Lawanda McMullen had a message for the other suspects wanted in her granddaughter’s death.

“Just turn yourself in,” McMullen said of the suspects, in an interview with ABC station WLS-TV in Chicago. “You know a 7-year-old girl she had nothing to do with that at all. You know if you have any heart, you know if you have a child — just think about your family.”

The first grader was shot six times as she and her 29-year-old father, Jontae Adams, were in the drive-thru of a McDonald’s in he Homan Square neighborhood of Chicago just after 4 p.m. on April 19, police said.

A McDonald’s employee told police that two armed men jumped out of another car and fired repeatedly into their car containing the father and daughter. Police said more than 50 shots were fired in the apparent ambush.

Jontae Adams suffered non-life-threatening injuries in the shooting, was treated at a hospital and has since been released, Brown said.

The Chicago Police Department said two guns were recovered from Lewis following his arrests, including an AK-47 rifle, matched shell casings found at the scene of the McDonald’s shooting.

“Both those weapons that were on his person that were recovered, they did test positive to the murder weapons used at the scene to kill Jaslyn,” CPD Chief of Detectives Brendan Deenihan said at Saturday’s press conference.

Asked if Jontae Adams was the target of the shooting, Brown would only say, “Let’s get to the point of bringing all of the offenders to justice then we’ll tell the full story of what happened here.”