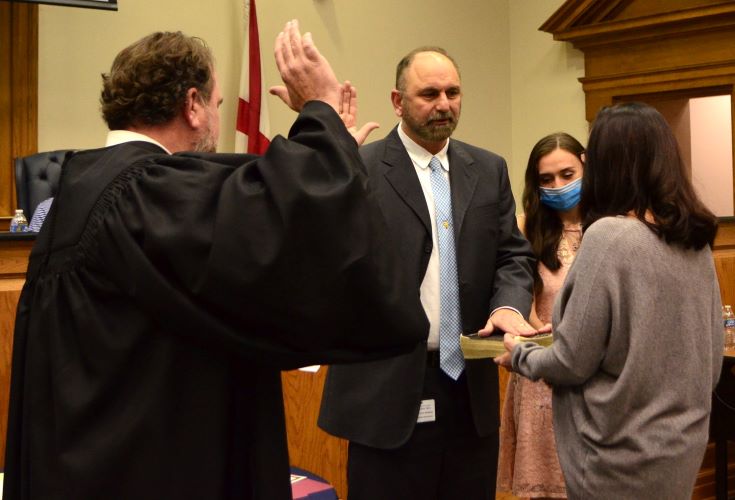 Dr. Dennis Willingham was sworn-in as superintendent of the Walker County Board of Education Thursday evening.

District Court Judge Henry Allred swore in Willingham, who was joined by his wife, Jennifer, and daughter, Bella.

Willingham thanked everyone for their presence Thursday and recognized others who were unable to attend. He also noted that the Bible he used during his oath of office was a gift from his late father.

“After I was appointed to this position, I did a Facebook post on the Walker County Schools page and I pledged to honor God first and to honor the children of this county and our school communities,” Willingham said. “I pledge to you that that is what I will do to the best of my ability.”

Allred shared some kind words prior to administering the oath of office and referred to Willingham as a lifelong friend.

“I’ve seen Dennis interact with people. We’ve all heard that old saying, ‘They don’t care how much you know until they know how much you care.’ Well, Dennis Willingham cares about Walker County, and he cares about the young people,” Allred said. “I’m proud to be here today because I know that every decision he makes, whether it’s right or wrong, he’ll be doing what he thinks is right for the young people of Walker County.”

“We appreciate the job that you’re doing and appreciate your family being here for this special day,” Ingle said. ” … We look forward to working with you.”

Willingham officially took the oath of office last month when he was appointed superintendent of Walker County Schools.

After being sworn in, Willingham spoke of the school system’s “Vision ’24” plan Thursday evening, which will be detailed in a future addition of the Daily Mountain Eagle.