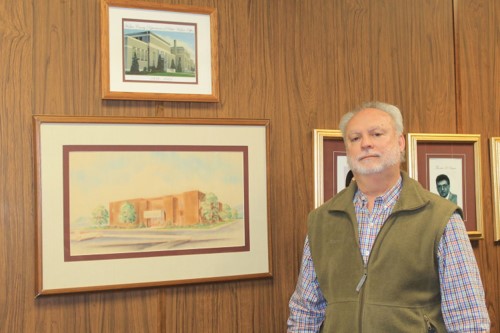 Randy Redmill retired from the Walker County Department of Human Resources on March 1 after 42 years with the department and 22 in the role of director.

Redmill, a Walker County native, is the sixth director to serve the department since it was established in 1935. Only one current DHR director in the state has more years of service than he does.

Jason Cowart, director of the Fayette County DHR, said that Redmill’s name and Walker County are synonymous around the state, adding that Redmill is considered “the cream of the crop.”

“When you do what he has done at this agency for 42 years and you deal with what we do day in and day out, that is not a job. That is not a career. That is a ministry. Unless you feel a deep call within your soul, there is no way that you stay that long to do this kind of work,” Cowart said.

Redmill came to DHR in January 1979 as a financial support worker. His primary responsibility was determining eligibility for family assistance, child support, Medicaid and food stamps.

At that time, DHR managed around 800 family assistance cases. Today, as a result of welfare reform initiatives that were implemented in the 1990s, the caseload has been reduced to approximately 55.

“A lot of our clients have received opportunities, training and skills and gone on to be successful folks in the community. Of those 55 that we have open, 80 percent of those are child-only cases, meaning a grandparent or some other relative is the one taking care of them and the child is the one who is the recipient of the check as opposed to a family,” Redmill said.

After five years as a financial support worker, he took on a new role in child welfare.

There were then around 160 children in foster care, but that number was drastically reduced as a result of a class action lawsuit filed in 1988 against the Alabama Department of Human Resources.

A consent decree issued in 1991 required all DHRs in the state to convert to new standards that emphasized the safety of children, family preservation and permanency. Under the previous system, the court found that children were removed from their homes too frequently, were kept in care too long and did not receive individualized services that were specific to their needs.

Walker County completed its conversion process in 1998, approximately a decade before the state was in full compliance.

In 1998, there were approximately 50 children in DHR custody. The number remained low until 2018, when it climbed exponentially. That year, approximately 85 children were brought into foster care, the largest number that Redmill had witnessed in his time with the agency.

The ongoing opioid epidemic was a root cause, as more than 90 percent of DHR foster care cases have substance abuse at the core, according to Redmill.

Today, there are approximately 130 children in care.

A common misconception about DHR is that the agency is the final authority when it comes to removing children from their homes.

“The truth of the matter is that there is a process we have to go through. We have to put together our case. If it’s bad enough, we file a petition with the court. If they agree with us, the children may or may not be removed or some plan will be put in place to take care of them. We are not without oversight. The court and laws set the parameters of what we can do,” Redmill said.

Some community members also fail to understand that a caseworker cannot impose his or her value system on someone else’s family. DHR is tasked with removing children from situations where they are in imminent danger.

“The thing I have tried to train my staff on is that we look for a minimally adequate level of care. It may not be ideal or what you want, but it meets the standard that the state has said that these children can live in,” Redmill said.

One positive change in the child welfare division is that adoption placements have shifted from being handled in Montgomery to opening up the process to DHR caseworkers who are intimately familiar with the children in care as well as the foster families.

DHR also has an Adult Protective Services division to “protect elderly and disabled adults from abuse, neglect, and exploitation and prevent unnecessary institutionalization,” according to the state DHR website.

Locally, there are more and more cases of exploitation being investigated every day, some of which result in DHR petitioning the court to declare the older person as an individual in need of protection, according to Redmill.

After child welfare, Redmill moved to a role as a community resource developer. One of the programs that he helped start was Project People, which was formed in the early 1980s to assist individuals who needed help but did not qualify for government assistance.

Shortly after completing a master’s degree in social work in 1991, Redmill was promoted to program supervisor, the role he held for seven years before becoming the director in 1998.

Redmill considers himself fortunate to have gained experience in so many different areas of DHR.

“Sometimes, people come into the job with a one-sided view, which is child welfare,” he said.

The local DHR board will begin the process of finding Redmill’s successor after he leaves the agency.

Redmill is ready for his next chapter, content with the difference he has been able to make in the lives of local families for the last four decades.

“It has been a wonderful career,” he said.