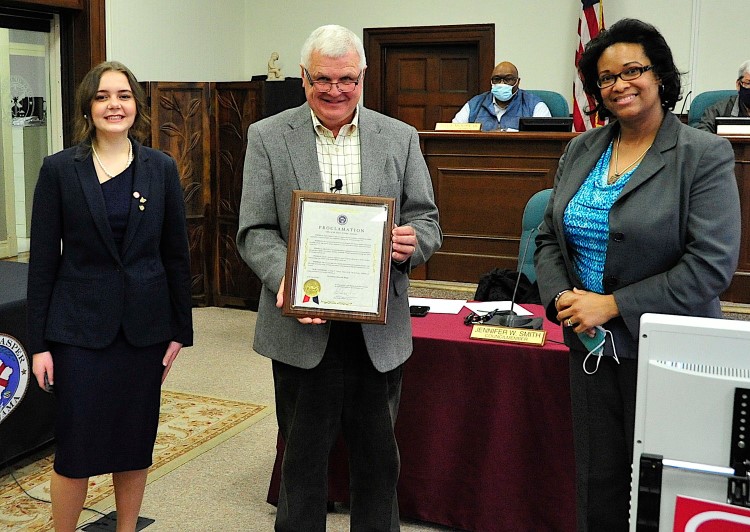 Jasper Mayor David O'Mary presented a proclamation recognizing the third week of February as Future Business Leaders of America Week in the city.

O’Mary’s move to reopen the programs, which have been shut down for the past year because of COVID-19, was fully supported by city council members, who passed a resolution to express their support.

O’Mary gave Jasper Parks and Recreation director Peter Cosmiano his blessing to begin work on summer baseball and softball programs for youth in the city.

“What I’m going to do today is exactly what I told you I was going to do (at a previous work session), and that’s to say ‘Peter, open the ballfields,’” O’Mary said.

There will be problems with getting the programs restarted, O’Mary said, and he’s asking for patience from parents wanting to register their kids for the programs.

“Glitches are going to happen, that’s to be expected,” he said. “It’s nobody’s fault, but we will be getting back up to full speed as quickly as possible and I call on our parents to be considerate of this and be supportive of our people.”

Cosmiano said registration for the programs will hopefully begin later this week. He said city officials are hoping most registrations will be done online, and he’s working to have the necessary forms available by Thursday or Friday.

“We’re hoping most of our registrations will be done online,” Cosmiano said, “but we understand that some people prefer to come by our office to do that. While our buildings aren’t open, we want to make provisions for someone who wants to come by.”

Information on the programs will be posted to the city’s website and to the parks and recreation department’s Facebook page.

In other business, council members:

•presented a proclamation in recognition of Future Business Leaders of America Week in the city.

•presented a proclamation recognizing February as Career and Technical Education Month in the city.

The council would have made both presentations at its last meeting, but wintry weather conditions prevented it, the mayor said.

•approved travel for personnel from the Jasper Police Department to attend training classes in Smyrna, Tenn., April 11-16 and April 13-16.

•approved travel for council members to attend the annual Alabama League of Municipalities Convention in Huntsville May 12-15.

•introduced an amendment’s to the city’s budget pertaining to the purchase of a mower for the city’s cemetery department and a vehicle for the police department.

•adopted a resolution to allow O’Mary to enter into a contract with Zach Baker to serve as talent buyer for the city’s 2021 Foothills Festival.

•adopted a resolution to approve an application for ARC and CDBG grants totaling $600,000.

The grants pertain to a $45 million expansion at Jasper Lumber Company, which will create 60 additional jobs.

•heard a report from city purchasing agent Derleda Abrom on fuel service, the purchase of a Chevy Silverado and Kubota RTV.

•adopted a resolution to place three properties under the city’s nuisance abatement ordinance.

•adopted an ordinance to levy ad valor taxes in the city. The ordinance is adopted each year.