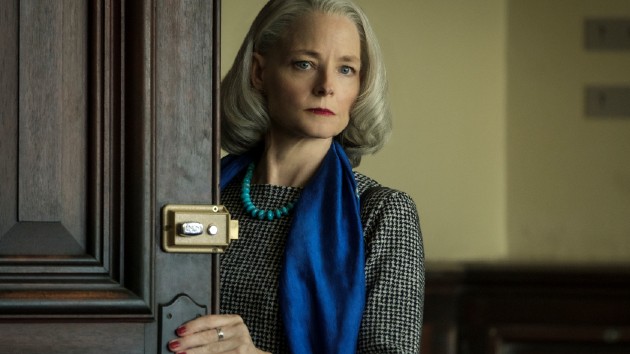 It follows the true story of Mohamedou Ould Salahi, played by Tahar Rahim, a man held without charges in Guantanamo Bay who fights for his freedom with the help of his dedicated lawyer, Nancy Hollander, played by Foster.

Rahim, who was also nominated for a Golden Globe for his role, tells ABC Audio he put himself through a strict diet and other grueling measures to physically and mentally prepare for some of the more challenging scenes where Mohamedou is tortured while imprisoned.

“[Director] Kevin [Macdonald] was a bit worried and he came to me like, ’Hey, calm down. You know, it’s all good, we have it.’” Rahim recalls of his deep dive into the character. “I’m like, ‘Don’t worry, I know what I’m doing, but I need this to, you know, to bring authenticity to my part, to you, to the audience and of course, to Mohamedou.”

The whole cast was inspired by Mohamedou’s story of resilience and wanted to do his story justice.

“I think a real lesson that Mohamedou has to give to all of us is that in the face of this kind of fear and terror, the best option is to become more human, not less,” Foster says.

So what was the real Mohamedou’s reaction to seeing the darkest times in his life play out on screen?

“He said, ‘Oh, man, thank you. What a great story and a great job. Thank you so much. People will know that Mauritania exists now!’” Rahim laughs. “That was a joke, of course.”

“You all have changed my life”: Ellen shares the series-ending news with viewers today

‘Hamilton’, ‘Wicked’ and ‘The Lion King’ returning to Broadway in September