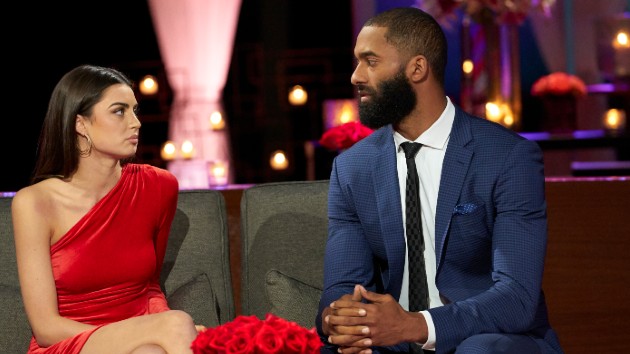 (LOS ANGELES) — Following Monday’s season finale of The Bachelor, which saw Matt James and Rachael Kirkconnell ride off into the sunset together, Emmanuel Acho hosted a special After the Final Rose show, which featured some frank discussions about race and bias in the wake of insensitive photos from her past turning up on social media.

First, Matt detailed the events surrounding the photos, which showed the 24-year-old graphic designer, among other things, attending an antebellum plantation-themed ball.

Matt told Acho his initial reaction to hearing about the photos was to dismiss them as rumors, but after learning they weren’t, made him “question everything.” He eventually came to the conclusion that Kirkconnell didn’t understand “what it means to be Black in America,” and for that reason, and had to “take a step back” from their relationship.

Rachael once gain apologized for the insensitive images, explaining, “I never once asked myself at any point, like, ‘What’s the tradition behind this? What does this represent? Why do we wear those dresses?"”

“This isn’t an “I didn’t know better” defense, she continued, “I never took the time to make that connection.”

Rachael also ruled out her upbringing as an excuse, stressing, “I did get a lot of people saying, ‘This is normal where I grew up.’… That doesn’t make it right.”

After an emotional apology from Rachael, in which she insisted, “I just don’t see how I can have these same feelings for someone else,” Acho asked Matt if the door was “even slightly open” for a reconciliation.

Matt responded by saying the feelings he had for Rachael “don’t go away overnight,” but “the reconciliation that needs to be done is work that I can’t do for you.”

With new teaser, HBO announces ‘Friends: The Reunion Special’ will air May 27