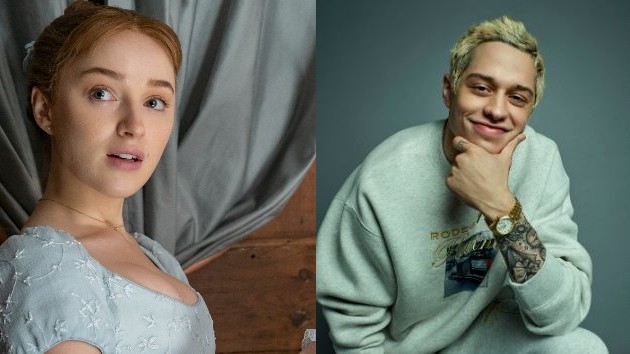 (NEW YORK) — The latest piece of Bridgerton-related gossip doesn’t come from the quill of the show’s resident tea-spiller Lady Whistledown, but from the pages of Us magazine: Pete Davidson and the show’s 25-year-old lead Phoebe Dynevor are “officially dating.”

A source tells the magazine, “Pete and Phoebe are still going strong despite not being able to physically spend time together.”

The 27-year-old SNL star is of course, working and living in New York City, while Dynevor, who plays Daphne Bridgerton, shoots the Netflix show across The Pond. “They keep in touch over text and FaceTime,” the source says. “Right now, they’re just focused on work. …They’re not looking to rush things.”

At least he now has some privacy to FaceTime: Davidson recently revealed during a Zoom call uploaded to TikTok that he finally moved out of the basement of his mother’s Staten Island, New York home and got his own apartment.

Davidson has famously been romantically linked to a slew of famous women, from his former fiancee Ariana Grande to Kate Beckinsale, to Cindy Crawford’s lookalike daughter Kaia Gerber, and Once Upon A Time…In Hollywood’s Margaret Qualley.

Donnie Yen to star alongside Keanu Reeves in ‘John Wick 4’

Gavin MacLeod, star of ‘The Love Boat’ and ‘The Mary Tyler Moore Show,’ dead at 90