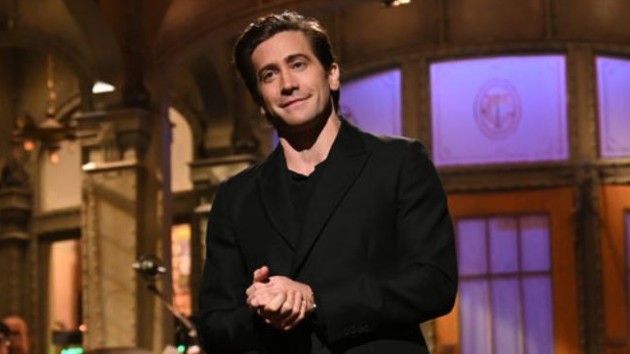 Jake Gyllenhaal hosted Saturday Night Live for the second time this weekend, and used his opening monologue to reminisce about his first appearance, back in 2007.

“That was like 400 Marvel movies ago,” the Ambulance star joked.

“To give you an idea of what it was like in 2007, in the show I hosted, there was a George W. Bush sketch, there were jokes about the first iPhone, and this is a photo of me from my monologue,” he continued, as a photo of Gyllenhaal in “full drag” flashed on the screen.

“There I am…singing a song from Dreamgirls, to promote a movie where I played a gay cowboy,” Gyllenhaal noted. “That was actually the least problematic thing in that episode, but looking back, I feel like I was a totally different person.”

Gyllenhaal may have ditched the dress and wig for Saturday’s monologue, but he once again closed with a musical number — Céline Dion‘s “It’s All Coming Back to Me Now,” with SNL’s Chloe Fineman, Ego Nwodim and Cecily Strong as backup singers.

Saturday’s musical guest was Camila Cabello, who performed “Bam Bam” and “Psychofreak” — the latter with the help of Willow Smith — from her new album, Familia.

Aidy Bryant said she left ‘SNL’ “with so much love”

“It means we’re back”: Robert De Niro on this year’s Tribeca Film Festival