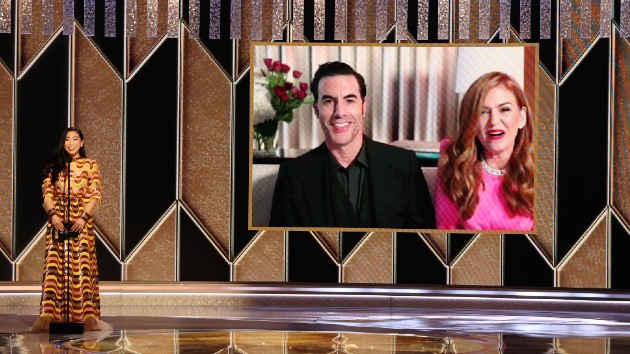 Cohen first accepted the award for Best Film and gave a surprising shout out to the former Mayor of New York City.

“I’ve got to say, this movie could not have been possible without my co-star, a fresh new talent who came from nowhere and turned out to be a comedy genius,” he began. “I’m talking about Rudy Giuliani. I mean, who can get more laughs out of one unzipping? Incredible.”

“Our movie was just the beginning for him,” he quipped. “Rudy went on to star in a string of comedy films. Hits like ‘Four Seasons Landscaping,’ ‘Hair Dye Another Day,’ and the courtroom drama ‘A Very Public Fart.’”

Moments later, the 49-year-old comedian snagged the Best Actor award — which he also won 15 years ago for the first installment of Borat.

Cohen appeared virtually with his wife Isla Fisher and kept his acceptance speech short and sweet — but not without a few more jokes.

Taking a jab at former President Donald Trump and claims that the 2020 election was subject to voter fraud, Cohen joked, “Hold on, Donald Trump is contesting the result. He’s claiming that a lot of dead people voted which is a very rude thing to say about the HFPA.”

Cohen was also nominated for Best Supporting Actor in a Motion Picture for The Trial of the Chicago 7 but fell short to Daniel Kaluuya in Judas and the Black Messiah.

‘Resort to Love’: Christina Milian explains why singing Alicia Keys’ songs in the film made her “nervous”