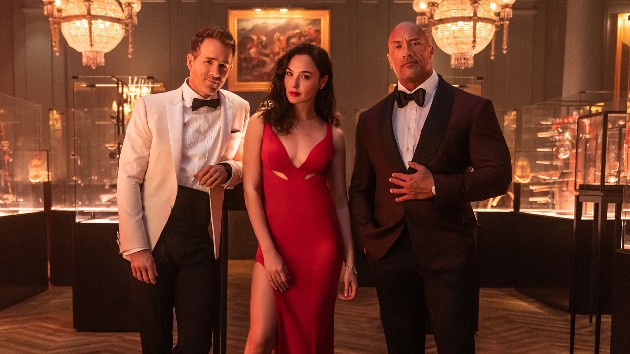 Dwayne “The Rock” Johnson just revealed on Instagram that his much-anticipated action comedy Red Notice will drop on Netflix on November 12.

“I’m officially serving you your notice,” Johnson told his 252 million followers, capping it with the “siren” emoji.

In Red Notice, Johnso plays “the FBI’s top profiler,” on the hunt for Gal Gadot‘s character, “the world’s most wanted art thief,” with Ryan Reynolds playing, “the greatest conman the world has ever seen.”

Johnson previously starred with Gadot in the fifth Fast & Furious installment, and with Reynolds in the Fast spin-off Hobbs & Shaw.

Star and co-producer Johnson shouted out his pals, saying, “Thank you to my insanely talented (and highly unattractive) costars @gal_gadot & @vancityreynolds [Reynolds] for our globetrotting heist,” revealing a photo of the movie’s stars. Wonder Woman star Gadot looks stunning in a red gown, flanked by Reynolds in a white dinner jacket, and Rock in a black tuxedo.

For his part, Reynolds tweeted, “True story. They made my entire tuxedo out of one of @TheRock’s socks.”

Johnson also thanked “205 million+ Netflix subscribers who are already making #RedNotice the most highly anticipated movie on the platform in 2021.” He added, “This is my career first streaming film and I wanted to make it big and special for all the fans worldwide.”

Red Notice was supposed to debut in theaters for Universal Pictures, but Netflix scooped up distribution rights in 2019. The film’s title refers to INTERPOL’s alert for the world’s most wanted fugitives.

True story. They made my entire tuxedo out of one of @TheRock’s socks.

Also, true… #RedNotice has a release date of Nov. 12th on @Netflix.

Cuba Gooding Jr. to be given trial date for sexual abuse charges on October 18