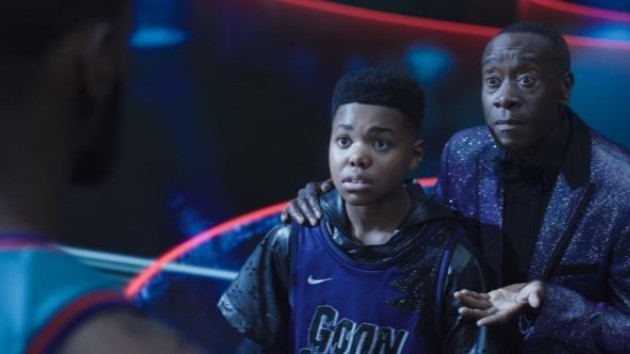 (LOS ANGELES) — Don Cheadle says he couldn’t pass up the opportunity to star in the upcoming film Space Jam: A New Legacy. The 56-year-old actor plays Al-G Rhythm in the sequel to the animated 1996 classic, opposite LeBron James.

Cheadle told Entertainment Weekly that he was immediately drawn to his “character, what was going to happen with LeBron, the [concept] of the film and the opportunity to take a classic title like that and do another spin on it with the latest GOAT, being LeBron.”

“I just thought, “Hey, this is cool. To get to play this really innovative character,” Cheadle said. “I just thought it was going to be a cool family story with LeBron and a cool character to play opposite him.”

Cheadle said in some ways his character Al-G “is LeBron’s nemesis, but I don’t think he sees himself in that way.”

“A lot of what is happening inside the movie is about what it means to be in a family, what it means to be yourself, and what identity is about,” he continued. “A lot of people can connect to all of those things, not just kids that are trying to figure that out for themselves.”

After working closely with the NBA star, Cheadle believes LeBron has what it takes to pursue a career as an actor.

“I think he’s absolutely down for it and wants to work hard at it. I would tell him if he got too good at it, he needs to stay in his own lane,” Cheadle joked. “He’s got enough shine.”

Space Jam: A New Legacy premieres July 16 in theaters and on HBO Max.

Misa Hylton dishes on her history with hip hop fashion and working with Mary J. Blige

Watch the trailers for ‘Set the Record Straight: The Jam Master Jay Case’ and Uzo Aduba’s ‘In Treatment’

Sharon Osbourne talks to ‘ET’ about the Piers Morgan racism flap, as new accusations are leveled against her