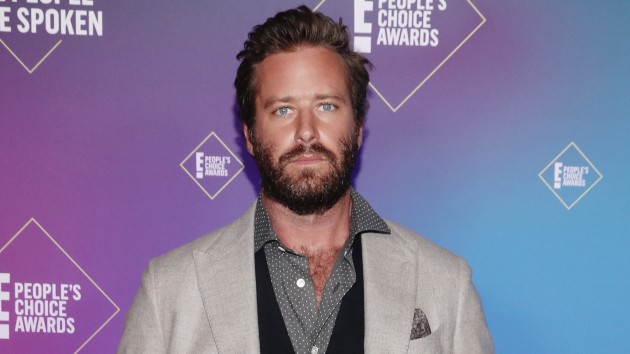 (LOS ANGELES) — (NOTE CONTENT) The woman who first accused actor Armie Hammer of assault and who apparently leaked salacious DMs allegedly from him came forward Thursday — and now his attorney is firing back.

The 24-year-old woman, who identified herself as Effie, flanked by attorney Gloria Allred at a press conference Thursday, accused Hammer of rape, saying, “I thought that he was going to kill me.”

She alleged that she and the former Lone Ranger star had an on-and-off four-year relationship.

“On April 24, 2017, Armie Hammer violently raped me for over four hours in Los Angeles,” Effie declared, adding, “[H]e repeatedly slapped my head against a wall bruising my face [and]… other acts of violence against me to which I did not consent.”

In response, Hammer’s attorney, Andrew Brettler, released a statement, and images of graphic texts he claimed were from Hammer’s accuser.

“[Her] own correspondence with Mr. Hammer undermines and refutes her outrageous allegations,” the attorney said in a statement to ABC News.  “As recently as July 18, 2020, [Effie] sent graphic texts to Mr. Hammer telling him what she wanted him to do to her. Mr. Hammer responded, making it clear that he did not want to maintain that type of relationship with her.  The screenshot…is just one of hundreds [she] sent to Mr. Hammer.”

The statement continued, “It was never Mr. Hammer’s intention to embarrass or expose [the accuser’s] fetishes or kinky sexual desires, but she has now escalated this matter to another level by hiring a civil lawyer to host a public press conference. With the truth on his side, Mr. Hammer welcomes the opportunity to set the record straight.”

The attorney added, “From day one, Mr. Hammer has maintained that all of his interactions with [the accuser] —  and every other sexual partner of his for that matter — have been completely consensual…and mutually participatory. [The accuser’s] attention seeking and ill-advised legal bid will only make it more difficult for real victims of sexual violence to get the justice they deserve.”

Before Effie came forward, another woman, Paige Lorenze, made similar behavioral accusations against Hammer to the Daily Mail, including Hammer statements of allegedly cannibalistic urges.

Although Hammer’s attorney denied the mounting accusations, the actor in February was dropped by his talent agency and his personal publicist quit, according to The Hollywood Reporter. The negative headlines caused the actor to step away from two projects: Shotgun Wedding, with Jennifer Lopez, and a series called The Offer, about the making of The Godfather.

The Los Angeles Police department released a statement on the matter of the first accuser, which read: “On February 3, 2021, investigators at the LAPD’s Operations-West Bureau, Special Assault Section, were contacted by an attorney representing a female community member. After speaking with the community member, the Department initiated a Sexual Assault Investigation which is being investigated by the Special Assault Section. This is an on-going investigation and no other details are available at this point.”