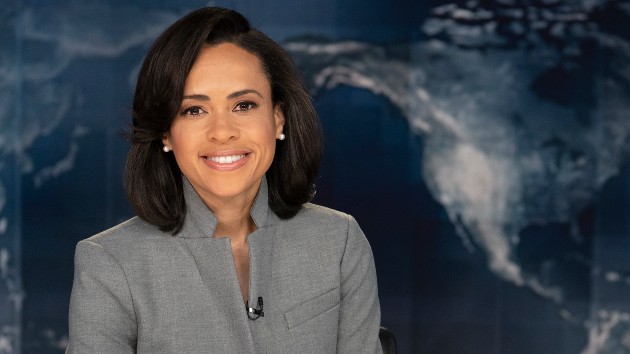 (NEW YORK) — ABC News correspondent Linsey Davis has been busy lately. She was recently promoted to anchoring World News Tonight on Sundays, making her only the second Black woman to anchor any major network newscast, after the “fearless, trailblazing” ABC News veteran Carol Simpson.  On top of that, Davis has just published her third children’s book.

With a laugh, the bestselling author of The World Is Awake and One Big Heart tells ABC Audio she never intended to write a series of books. That said, her latest, Stay This Way Forever, is something special.

“I’ve been calling it a love letter from parents to children,” says Davis, whose son Ayden is now seven.

“You know, as a parent…there are those moments where you just wish you could kind of press the pause button…really savoring and just kind of freezing in time,” she explains. “Because you never know when is the last time they’re going to reach up to hold your hand, or fall asleep in your lap. And that kind of just fun, playful joy that that kids have in such a unique way.”

Beginning with her first book, Davis said she’s worked tirelessly with artist Lucy Fleming to capture a world that can help children of all racial backgrounds see themselves.

“We wanted to make sure that, while whimsical and while abstract a little bit, that kids would actually see…what they really look like reflected in the illustrations…really trying to capture the essence of our variety in the variations between us,” she notes.

As for her day job, a “really grateful” Davis said of her anchoring WNT, “I’ve been talking about a famous quote from Shirley Chisholm, the first black congresswoman, who had said, ‘If they don’t give you a seat at the table, bring a folding chair."”

Patina Miller and Omar Epps explain why ‘Power Book III: Kanan’ was the perfect series for them to join

Viola Davis to release memoir, ‘Finding Me’, in April 2022