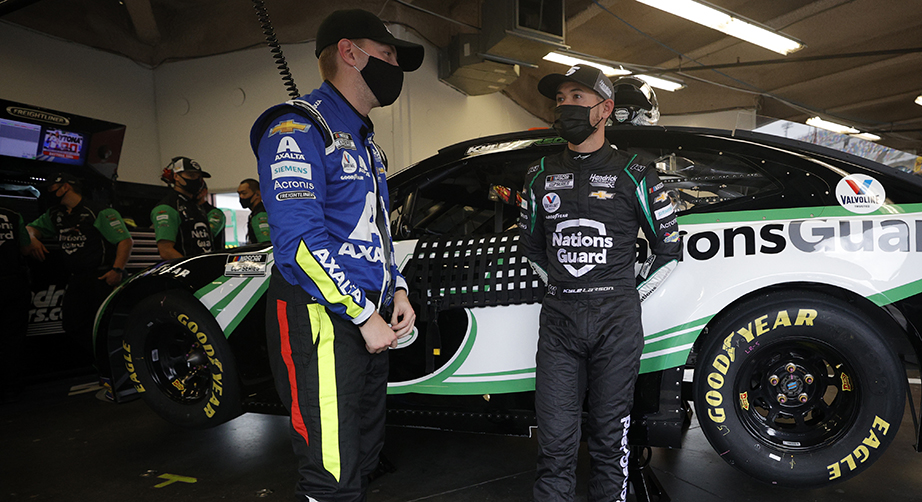 Two of the first five races have gone to Hendrick Motorsports drivers with William Byron winning at Homestead-Miami Speedway and Kyle Larson finding Victory Lane at Las Vegas Motor Speedway. In addition to their wins, Bowman and Larson have combined to post a collective seven top-10 finishes. Defending series champion Chase Elliott remains winless but has been a constant presence near the front of the field and has a pair of top-five performances. Only Alex Bowman is struggling overall inside the Hendrick camp but even he has been inside the top-10 twice so far. Things are hitting on all cylinders for team owner Rick Hendrick.

Not far behind the Hendrick performance is JGR, which has put a pair of wins on the board as well with Christopher Bell‘s Daytona Road Course victory and Martin Truex Jr.‘s win at Phoenix Raceway. Denny Hamlin is on top of the series point standings and has already collected three stage wins with four of his five finishes among the top-five. Kyle Busch is lagging some but did have a third-place Las Vegas run. While not yet better than Hendrick, JGR is not that far behind at this early juncture of the season.

On paper the year has by no means been terrible for Kevin Harvick. The Stewart-Haas Racing driver has registered two top-five and four top-10 finishes in the opening quintet of races. But by his own admission, Harvick and the No. 4 team is a bit off from where they were a year ago when he collected nine wins. Harvick has led just 17 laps thus far and is not showing the kind of strength he‘s been associated with in recent years. Crew chief Rodney Childers points to a change in the inspection process of rear wheel wells that has robbed significant downforce from the team, a challenge that will need to be remedied in a hurry for Harvick to return to his previous ultra-competitive form.

The year began with an upset Daytona 500 win by Michael McDowell and several other drivers and teams have enjoyed better performance so far in 2021. Chris Buescher gave Roush Fenway Racing fans something to cheer about when he led laps and won a stage at Homestead. Ryan Preece and Ricky Stenhouse Jr. of JTG Daugherty Racing have moved closer to the front of the field than in recent years and sit 14th and 16th, respectively, in the Cup Series point standings. Erik Jones brought home a top-10 finish for Richard Petty Motorsports at Las Vegas. While the heavy hitters are starting to separate themselves from the pack, it‘s been a refreshing sight to see other teams enjoying some early success.

Nearly every different discipline of track has hosted the Cup Series already this season. A superspeedway at Daytona followed by a road course event at “The World Center of Racing” began the campaign. Homestead‘s multiple groove 1.5-mile oval preceded a trip to Vegas and its completely different mile-and-a-half layout. The truncated west coast swing ended at the unique one-mile Phoenix Raceway configuration. The variety has produced interesting and entertaining competition with Atlanta and the Bristol dirt track next up to continue the trend before the series takes a break for the Easter weekend.