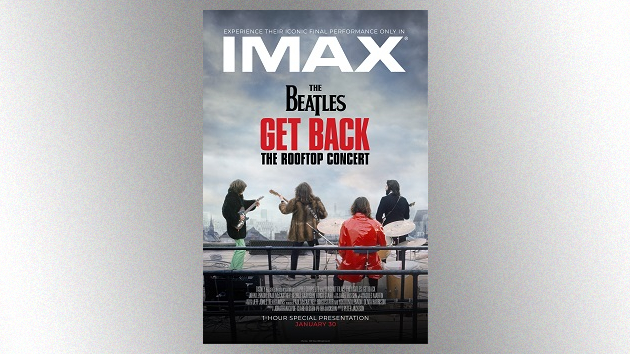 If the promise of watching Peter Jackson‘s acclaimed three-part documentary The Beatles: Get Back wasn’t enough to make you sign up for Disney+, it’s now coming to home video — and to a theater near you.

The complete docuseries will be released on Blu-ray and DVD on February 8, but to whet your appetite, the “rooftop concert” portion of the series, which runs 60 minutes, will debut at select IMAX theaters as part of a special screening on January 30. The screenings will feature a Q&A with Jackson via satellite, as well as exclusive mini-posters for attendees.

“I’m thrilled that the rooftop concert from The Beatles: Get Back is going to be experienced in IMAX, on that huge screen,” says Jackson in a statement. “It’s The Beatles‘ last concert, and it’s the absolute perfect way to see and hear it.”

The concert, which took place on the rooftop of The Beatles’ Apple Corps headquarters on London’s Savile Row on January 30, 1969, was the last time all four member of the band performed together live. The performance was seen in its entirety for the first time in The Beatles: Get Back.

Tickets for the IMAX Event Screening and Filmmaker Q&A are currently on sale at Tickets.IMAX.com. A regular global theatrical showing of The Beatles: Get Back — The Rooftop Concert will then run from February 11 to February 13.