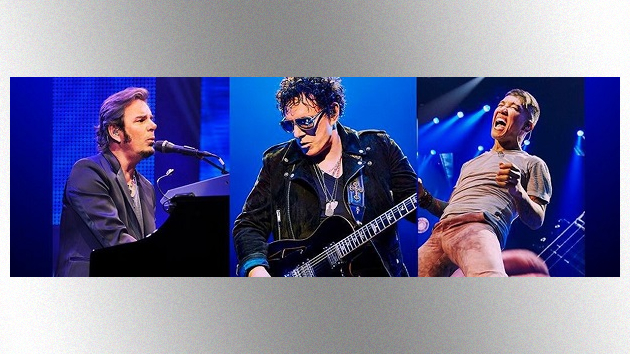 Journey returns to the concert stage this week for the first time since the start of the COVID-19 pandemic in 2020 with two shows in Chicago — one tonight at the Aragon Ballroom and the second on Saturday at the Lollapalooza festival in Grant Park.

The concerts also will mark Journey’s first live performances since three new members were welcomed into the band — bassist Randy Jackson, drummer Narada Michael Walden and keyboardist Jason Derlatka. However, keyboardist Jonathan Cain tells ABC Audio that Jackson — who previously played with Journey during the mid-1980s — will be missing the Chicago gigs.

“Unfortunately, Randy’s not going to be there, ’cause he’s got back surgery,” Cain reports. “Marco Mendoza, a good friend of ours [who] plays great, he’ll fill in for now.”

Cain says he finds it interesting that Journey will launch its new chapter in Chicago, where he was born.

Journey recently released its first single with the new lineup, “The Way We Used to Be,” and Cain says the band likely will include it in their sets this week, as well as plenty of the group’s classic hits. Jonathan also notes that Journey will be playing a longer set at the Aragon Ballroom — which is considered an official Lollapalooza “Aftershow” event — so they may dig deeper into their catalog for that performance.

Journey guitarist Neal Schon, meanwhile, tells ABC Audio that he’s hoping the band will be jamming more and be doing more extended sets in the future.

“I think Journey is capable of being one of the greatest jam bands in the world ever,” he declares. “And everything in my intuition is telling me that it’s time to…encompass it all in one concert, be daring, go out on a limb with no net and create…in front of people.”