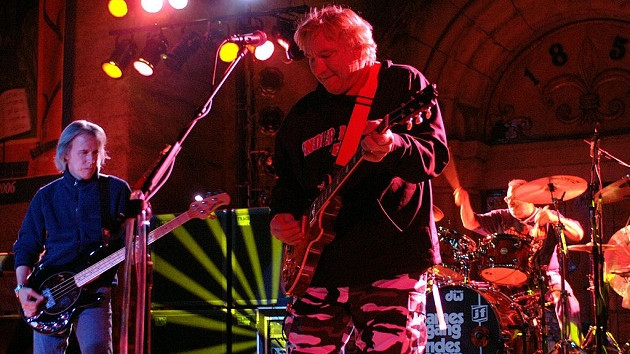 Joe Walsh‘s recently reunited pre-Eagles band the James Gang will participate in their first in-store signing event in over 50 years on Tuesday, November 8, at Used Kids Records in Columbus, Ohio.

During their appearance, Walsh, drummer Jim Fox and bassist Dale Peters will take part in an interview and then sign autographs at the store, which is located just a few blocks from Joe’s childhood home

To gain entry, those attending the event will be asked to buy an exclusive t-shirt or hat, and all proceeds will go directly to Walsh’s VetsAid charity, which raises and funds for various veterans-related organizations. Attendees also can bring one piece of James Gang or Walsh memorabilia to be signed in addition to the item they purchase.

Since the in-store event is taking place on Election Day, attendees wearing an “I Voted” sticker will receive a coupon giving them $5 off on purchases of $25 or more at Used Kids Records.

“Like many a music geek, I have spent a fair amount of my life in independent record stores and I owe a lot of my musical education to their existence,” says Walsh. “Thanks to Used Kids Records for hosting us and for hopefully blowing the mind of a little Joe Walsh who may be growing up just down the street like I did.”

The concert also will be livestreamed globally at via the Veeps platform, and passes are available for purchase now at VetsAid.Veeps.com.