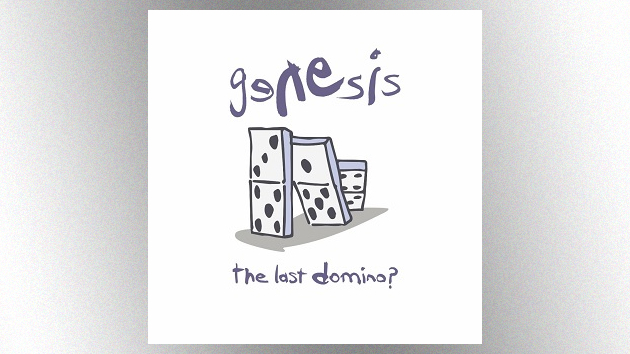 With Genesis preparing to kick off its The Last Domino? Tour soon, the band has announced plans to release a new companion compilation that will coincide with the launch of the North American leg of the trek.

The 27-track collection, titled The Last Domino?, will be released on November 19, four days after the North American out begins in Chicago.

The compilation, which you can pre-order now, will be available as a two-CD set or a four-LP 180-gram-vinyl package.

The band is planning to play the majority of songs featured on The Last Domino? on its upcoming tour. Familiar Genesis tunes featured on the retrospective include “Turn It On Again,” “Land of Confusion,” “Hold On My Heart,” “That’s All,” “The Lamb Lies Down on Broadway,” “In Too Deep,” “Follow You Follow Me,” “Throwing It All Away,” “Tonight, Tonight, Tonight,” “Invisible Touch,” “I Can’t Dance,” and “Abacab.”

The four-LP version of the compilation will feature hardback gatefold book-style packaging, and will include rare and unseen archival images of the band, as well as photos taken during rehearsals for the new tour.

The Last Domino? Tour kicks with a series of shows in Ireland and the U.K. in September and October. The North American trek is plotted out from a November 15-16 stand in Chicago through a December 15-16 engagement in Boston. Check out all the dates at Genesis-Music.com.

CD 2
“Duchess”
“No Son of Mine”
“Firth of Fifth”
“I Know What I Like”
“Domino Medley”
“Throwing It All Away”
“Tonight, Tonight, Tonight”
“Invisible Touch”
“I Can’t Dance”
“Dancing with the Moonlight Knight”
“Carpet Crawlers”
“Abacab”

The Rolling Stones launching 2021 US tour Sunday in St. Louis, letting fans choose one song for the set

The Rolling Stones share details about new US tour, which kicks off this Sunday

Deluxe, expanded reissues of The Pretenders’ first two albums due out in November