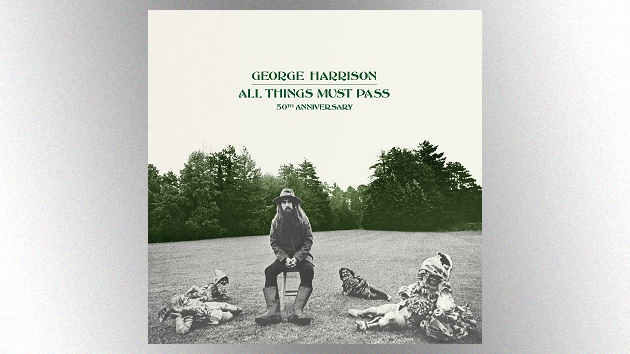 An expanded 50th anniversary edition of George Harrison‘s classic 1970 debut solo album All Things Must Pass will be released August 6 in multiple formats and configurations, including a Super Deluxe eight-LP or five-CD/Blu-ray-audio set.

The Super Deluxe reissue features a new mix of the original 23-track album, the demos Harrison recorded during the first two days of the All Things Must Pass sessions, and a variety of outtakes and studio jams. Forty-two of the tracks are previously unreleased.

Released in November 1970, All Things Must Pass spent the seven weeks at #1 on the Billboard 200. It features George’s enduring spiritual anthem “My Sweet Lord,” which — released as a two-sided single with “Isn’t It a Pity” — became the first solo song by a Beatle to top the Billboard Hot 100, spending five weeks at #1.

Other standout tunes on the album include the top-10 hit “What Is Life,” “Wah-Wah,” George’s memorable cover of Bob Dylan‘s “If Not for You,” and the Dylan-co-written “I’d Have You Anytime.”

The All Things Must Pass reissue was executive-produced by Harrison’s son, Dhani.

To celebrate the reissue’s announcement, a previously alternate take of “Run of the Mill” has been released as a digital track, and an animated music video for the track has premiered at Harrison’s YouTube channel.

Visit GeorgeHarrison.com for a full track list and details about the various versions of the All Things Must Pass reissue.